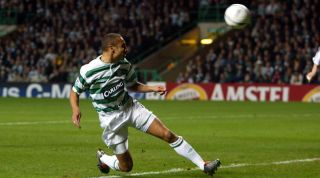 Celtic take on Kazakh side Astana in the Champions League play-off this August in an attempt to regain entry to the full competition for the second year in a row.

Such is Celtic's dominance of their domestic scene right now, that the true measuring stick of Brendan Rodgers' side is in Europe’s premier competition. And although Celtic have never repeated their cup-winning success of 1967, there have been many Celtic sides who have performed admirably in the Champions League since its 1992 makeover.

That includes wins over the likes of Juventus, Manchester United and Barcelona - but can you recall the players who scored the goals in these triumphs?

You have six minutes on the clock to name all scorers in the competition itself (not counting qualification rounds). Get cracking, let us know how you got on @FourFourTwo (we’ll retweet the best scores if you don’t give answers away) and challenge some pals too.