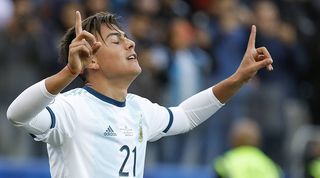 Could it be? In one of the most interesting deals of the summer, Paulo Dybala and Romelu Lukaku may be swapping places at Juventus and Manchester United respectively. Some canned crowd excitement, please.

Perhaps surprisingly, however, only 24 Argentines in Premier League history have played at least 50 matches in the division. So we’ve extended today’s quiz to encompass those who’ve hit the more modest 40 mark.

You’ve got seven minutes to name as many of the 33 amigos below who’ve made an impression in England’s top flight since 1992/93. Once you’re done, tell us your scores @FourFourTwo and we’ll retweet by way of comparison (just don’t give away spoilers).

FEATURE When Gareth Bale was unplayable: remembering his golden 2012/13 at Tottenham

QUIZ! How many of the 33 Belgian goalscorers in Premier League history can you name?