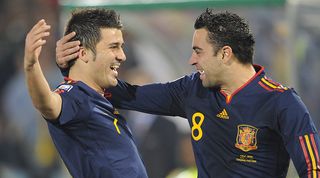 Ah, 2010. Who could forget the drone of the vuvuzelas, the “goal for all of Africa,” and ITV cutting to a Hyundai advert during England’s best moment of the tournament.

While it wasn’t a great tournament for Three Lions fans (particularly anyone who sat through England 0-0 Algeria, comfortably the worst game in living memory), some players did enjoy it. BZZZZZZZZZZZZZZZZZZZZZZZ!

The Black Stars were the breakout stars of the tournament – quick on the break, and quite brilliant to watch. Gyan was key to their success. Two group stage goals (both penalties) helped Ghana reach the knockouts, and then a 93rd-minute strike downed the United States in the last 16.

That set up a quarter-final tie with Uruguay. In one of the most dramatic moments in World Cup history, Gyan smashed a last-minute penalty against the bar after Luis Suarez handballed on the line, but picked himself up to score in the penalty shootout. They still lost, mind.

Before he was a languid scapegoat for everything wrong at Arsenal, Ozil was actually a pretty decent player. He was the creative force of a Germany side that scored 16 goals in this tournament, including four against England in what was probably Ozil’s best performance of the tournament. Joachim Low's side were clinical on the break, and the then-Werder Bremen player’s ability to pick the right pass under pressure proved key.

When the Dutch winger left Chelsea, few would have predicted the longevity of his top-level career. His style of play hasn’t really changed much since 2010, where he was one of the best players despite starting the tournament nursing a hamstring injury. That restricted him to just one substitute appearance in the group stage, but in the knockout rounds he more than justified his inclusion in the squad.

Robben scored the first goal in a 2-1 last-16 win over Slovakia, and then again in Holland's 3-2 semi-final win over Uruguay. He also spurned their best chance in the final, though – a miss which he says still haunts him.

Don’t be fooled by Schweinsteiger’s spell at Manchester United, when he was about as mobile as a railway snack trolley. The 2010 vintage was a different beast entirely – part winger, part marauding midfielder, Schweini was quick, strong and powerful. At 25, he was still one of the most experienced members of Germany’s young side, and was tasked with replacing the injured Michael Ballack in the centre of midfield.

His best performance came in the 4-0 shellacking of Argentina in the quarter-finals – the German’s answer to some playful pre-game jibes from Diego Maradona. "What's the matter Schweinsteiger? Are you nervoushh?" the outspoken Albiceleste manager had said directly to camera, in a faux-German accent. Evidently not, Diego.

Spain had struggled to find a clinical striker for years before Villa came along. Having already fired them to glory in Euro 2008, he repeated the feat at the World Cup. The Barcelona-bound attacker scored five of Spain’s eight goals en route to glory, including a long-range strike from distance against Chile into an empty net left vacated by one Claudio Bravo.

The Spanish were far from as fluent in South Africa as they’d been two years previously, but their string of 1-0 wins couldn't have happened without Villa’s clinical finishing.

Most players need to get an international tournament under their belts before they can really show their best work on the global stage. Not Thomas Muller. At 20, he scored five goals and set up three more for Germany to win the Golden Boot, as the country’s long-term player development plan started to come to fruition.

Operating from the right, he soon demonstrated a Miroslav Klose-like knack for being in the right place at the right time.

The midfielder had needed to rebuild his reputation somewhat after a middling spell with Real Madrid, but a stunning, Treble-winning debut season at Inter Milan couldn't have set him up any better for South Africa. Indeed, he was superb here, fuelling Holland's run to the final with his work-rate and passing prowess.

Sneijder also chipped in with five goals, including both goals in a 2-1 quarter-final victory over Brazil. His tournament performances led to links with Manchester United, but he stayed at Inter until 2013 and then enjoyed a long spell with Galatasaray. Now 33, he is currently plying his trade at Qatari side Al-Gharafa.

If Xavi was the base for Spain’s success, then Iniesta was the statue that sat on top of it – the player who helped them break down teams that couldn’t be passed to death. The playmaker, who called time on his Barcelona career this season, ghosted between the lines and popped up in dangerous areas.

That was most noticeable, of course, in an ugly final that needed some invention. Cometh the hour: deep into extra time, Iniesta latched onto a pass from Cesc Fabregas and fired Spain to their World Cup win.

Like an action movie character pulled in for one last job, the once-hapless Forlan returned to our screens as a rugged Uruguay veteran – older, wiser, and somehow a whole lot better.

Spain went into the tournament as strong favourites off the back of their performance at Euro 2008, and with the Spanish heart of Pep Guardiola’s all-conquering Barcelona side.

Xavi was the platform in midfield; finding space and playing short, simple passes to set the tempo of Spain’s tiki-taka football. He completed more passes than any other player in the tournament, of course. A bastion of sustained excellence.