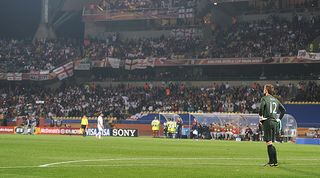 The first of several shocking errors which greatly benefited South Korea, this glaring miss came from an Italian striker who had been on hot form. Christian Vieri had already scored against Croatia and twice against Ecuador before taking his 2002 tally to four in Italy’s second-round encounter against the co-hosts.

However, the hero became villain when he fired the ball both wide and high in front of a gaping goal just seconds after South Korea had netted a late equaliser. Italy later blamed referee Byron Moreno’s questionable decisions in extra time for their exit, but Vieri should have put fate in their own hands.

The jury’s still out about whether Ilunga’s infamous free-kick interruption was actually an embarrassing misunderstanding of the game’s basic rules or a deliberate protest against his homeland’s authorities, as he later claimed.

The Zaire international became something of a laughing stock at the 1974 World Cup when he raced out of a defensive wall and booted away Brazil’s free-kick before they’d even taken it. Ilunga was cautioned for his bizarre premature booting, then later claimed he was in fact aiming for a red card as a protest against his team’s lack of financial earnings (although his shrugging reaction to the referee slightly undermines his excuse).

OK, so it’s a slightly unfair target including Ross, as the soul legend never proclaimed to be a world-class footballer – and she’s undoubtedly still better at taking spot-kicks than most footballers are at singing Motown classics.

Yet the former Supreme’s missed penalty at USA '94 – which thanks to some Hollywood magic still managed to break the net in two – remains the most enjoyably ridiculous moment of any World Cup opening ceremony.

Unfortunately, the divine Miss Ross’s spot-kick abilities ended up looking relatively impressive when compared to those of the Divine Ponytail. In a poetic bit of bookending, the 1994 World Cup also concluded with a terrible penalty, only this time it was a footballing genius rather than a 50-year-old diva who was responsible.

Roberto Baggio’s decisive shootout effort – which gifted Brazil the trophy following a deathly dull 120 minutes of open play – was blazed so sky high over the bar that it’s still probably somewhere in the sky above California’s Rose Bowl. What's less remembered is that he was actually the third Italian to miss in that shootout, after Franco Baresi and Daniele Massaro.

ICONS Roberto Baggio – the miss that haunted a career (1994)

Paul Robinson’s bobbling backpass blunder in Zagreb. David Seaman’s desperate back-peddling against Brazil. Scott Carson’s crucial fumble against Croatia. Since the turn of the century, England keepers have developed a reputation for humiliating themselves at the most ill-timed moments.

Poor Green added his name to that list at South Africa 2010 when he somehow spilled Clint Dempsey’s weak, 25-yard shot into his own net to gift the USA an equaliser. He was dropped after that error, but it was a sign of things to come during a hopelessly inept campaign which proved once and for all that the Golden Generation was nothing but a myth.

Fabio Capello was then forced to watch another one of his net-minders make a calamitous error four years later. South Korean striker Lee Keun-ho’s long-range effort was hit slightly more powerfully than Clint Dempsey’s, but it still should have been a routine save for Russia’s Akinfeev.

Instead, the then-28-year-old comically palmed the ball over his head and into the net to put the Koreans in front. Aleksandr Kerzhakov managed to spare his blushes with an equaliser just minutes later, but Akinfeev’s World Cup nightmare continued in his Russia's final group game when he was temporarily blinded by a green laser seconds before Algeria scored from a free-kick.

The World Cup was never particularly kind to Agoos. The USA defender deliberately burned his kit upon learning that he’d narrowly missed out on a place at the 1994 tournament. He did make it to France ’98, but then failed to make it onto the pitch. And when he finally got some action in 2002, he scored one of the most spectacular own goals in World Cup history.

Thankfully for Agoos, his volleying gift to Portugal wasn’t decisive – USA still won the match 3-2. But his rotten luck continued when he limped off with a calf injury in their next game against Poland and missed the rest of the United States’ journey to the quarter-finals.

Yakubu is the second-highest African goalscorer in Premier League history, the third-highest in Nigerian international football and was once Everton’s record transfer signing. But he will be forever remembered for his nightmare miss at the 2010 World Cup.

The striker looked destined to give the Super Eagles a vital equaliser against South Korea when he was presented with an open goal just three yards out, and yet somehow he dragged the ball wide. Yakubu sort of made amends when he scored from the penalty spot just minutes later, but Nigeria failed to find the winner they needed and the regularly-fortuitous Koreans progressed to the second round at their expense.

Renowned for that audacious, if essentially risk-free scorpion kick against England in 1995, flamboyant Colombian Rene Higuita first earned his El Loco (The Madman) nickname five years earlier. With their Italia ’90 second-round encounter against dark horses Cameroon evenly poised at 1-1 in extra time, the sweeper-keeper unwisely attempted to outmanoeuvre the in-form Roger Milla near the halfway line.

Inevitably, he was dispossessed by the 38-year-old cult hero, who then won the frantic race towards Colombia's goal and sent the South Americans home. Oh dear.

Poll was often accused by his detractors of making the game all about him. But surely even the most fame-hungry of officials wouldn’t have wished for the attention caused by his almighty World Cup faux pas in 2006.

Not realising that he'd already booked Croatia’s Josip Simunic, Poll failed to dismiss the defender when he issued him with a second yellow late in the game for chopping down an opponent. But his mistake was compounded just minutes later when he unwittingly gave the Croatian a third booking, and his belated marching orders, at the final whistle.

Poll later blamed the incident on an admin error caused by Simunic’s accent. The Croatia defender was brought up in Canberra so had a strong Australian accent, leading to Poll’s brain-freeze when he spoke to the player. He then wrote the name of Australia’s No.3 – Craig Moore – in his pad for a booking. Upon realising his error post-match, Poll asked to be sent home with the first batch of officials let go after the group stage. FIFA duly obliged and Poll retired from the international game shortly after.