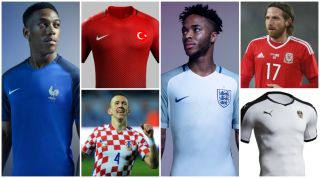 Adidas have made some cracking kits for Euro 2016, and we’ll be waxing lyrical about them later, but Russia’s home top isn’t a patch on their swish away number. The crest imprint belongs on the wallpaper of a film noir brothel.

Nobody is more excited than FFT to watch Iceland take on nations 20 times their size, but we wish they wouldn’t do it wearing shirts with weird collars made worse by Comic Sans-like lettering on the inside.

We’d love to know what Cristiano Ronaldo thinks of this hue. It somewhat undermines the breastplate’s intended intimidating effect.

“Carl! Romania called – they need a new strip in time for tomorrow’s launch. I’ve just about got the collar sorted, although it’s a bit tight; do we have any material left for the rest of it? What do you mean, ‘just yellow’? How much yellow?”

“Oh, now you find another colour. All right, this’ll have to do. Let’s just hope they don’t face Ukraine or Sweden. No, Carl, for the last time: Brazil won’t be at the European Championship...”

We applaud the intent to do something different, but this looks like a training top – albeit a durable one. You’d take it to the gym, anyway.

Speaking of training tops, this literally is one. Germany’s reversible away shirt, worn against England, doubles as a practice bib. Full marks for innovation; fewer marks for colouration.

A classical style suits the Azzurri, but there’s something not quite right about the pinstripes, restricting collar and wavy midriff pattern. Wait until you see the away kit, though – it’s bellissimo.

It isn’t easy to design a minimalist two-headed eagle to be fair, but these panels looks less like Albania’s emblem and more like the Millennium Bug. The home (red), away (white) and third (black) strips are near-identical in design, down to the unusual “Korean collar”.

Tartan was born beside the Black Sea – who knew?

We’re torn on this kit (probably because it’s so tight). The shading is nice, as is the central positioning of the crest, but the overall feel is that of a base layer rather than a football shirt. And why are those chevrons pointing so suggestively south?

This change strip is slick and tidy, not unlike the team. However, it’s perhaps in need of white shorts to offset the strong colour and assert Poland’s identity.

Eye-catching cross-hatching suits Ukraine’s regular uniform better than their blue away top, though we’re not sold on buttons adorning a football kit. And if you disagree, Crimea river. Eh? Eh? Oh, never mind.

32. Republic of Ireland, away

The FAI and Umbro released a new change strip at the behest of supporters, and they seem happier with this refined if routine effort than the "charcoal, white and green gecko" hues of the previous away shirt.

Sharing the midriff wave and thick hoops of Puma stablemates Italy and Switzerland respectively, with a swooping collar to boot, this feels a little unfocused.

We challenge you to be excited by this kit.

Ditto. Die Mannschaft must have a sober home kit, of course, but without striped sleeves (Adidas have moved them to the flanks on several of their designs) it’s oddly drab – or classic, depending on your tastes.

And here’s why many supporters favour a classic look. Wales fans are divided over this effort. We quite like it, but must deduct points for lacking traditional Welsh colours and – as with the home kit and both of Northern Ireland’s – including a collar that’s simultaneously a V-neck and, when folded back, a crew neck. Odd.

The three logos battling for space on one stripe is a little undignified (not an issue for the Swiss away kit, higher in this list), although there’s some nice sleeve work on display.

Slovakia suffer the same agonising dilemma: a triple logo melée. On the other hand, the colour balance and barcode effect work nicely.

Welshmen were much happier with this classic design. Timeless, certainly, but it doesn’t set our pulses racing – plus the reversion to white shorts is a shame.

Umbro have gone all out, with orange trim and a Gaelic-style font. Shame about the collar, which looks out of place.

Unfussy if unspectacular, Portugal’s home strip features a smooth green stripe continuing from shirt to shorts. As with their change strip, however, the breastplate motif is a bit invasive.

England’s second kit is similar to Portugal’s first, but with a more pleasing – if not particularly English – colour combination.

Different without being distracting, this is a solid effort. We especially like the Austrian flag adorning the sleeve ends.

A.K.A. The kit that split a nation. Several thousand Northern Ireland fans signed a petition to change what’s seen as an overly blue affair. Predictably, FFT disagrees. In short: we like it. Sorry, chaps.

The thought of Polish football evokes memories of Grzegorz Lato and Zbigniew Boniek, and they’d be proud to wear this number. It’s classical yet… what’s a posh word for ‘swirly’?

Nike’s decision to tear up the rulebook and design matching shirts and shorts with different socks pays off here. Bar one-off games, England haven’t played in white-white-red before. Better late than never.

The hooped socks are an acquired taste, but the top is delectable. The Swiss flag’s imprint on that central bar works perfectly.

This huge improvement on Russia’s home kit shows how you should imprint a crest on a football jersey. Very nice, if a little t-shirty.

Call us crazy, but this is great: daring, vibrant, reminiscent of USA 94 and memorable – definitely memorable. The only problem is that, like the Russian away shirt, the pattern seems more suited to a t-shirt.

Oh wow. Now, it’s possible that after so many designs FFT is imagining seeing-eye puzzles, but if these are real then hats off. These are fine, fine football kits; the home one even works as a Spider-Man costume.

If the home kit splits opinion, this is a surefire winner. With two-tone green shading and simplicity of design, it’s an understated gem, right at home in Norn Iron’s historical kit canon. It’s just that double collar…

Spain’s home jersey incorporates the away shirt’s triangles (a tribute to their passing game, perhaps) with just a touch more subtlety. And, despite featuring four colours, the whole ensemble isn’t too busy. Yes, we used the word ‘ensemble’ – what of it?

What is it about the blue tones of Croatia’s away kits that makes them look so good? This is a beauty, even by their own high standards.

This typically strong Belgian effort gets every shade perfect, and demonstrates well why Adidas changed the positioning of their stripes. There’s a lot going on – the back looks very different from the front – but it’s one of the best home kits at Euro 2016. Even Marouane Fellaini looks good in it… ish.

Oh, j’aime ça. The Tricolor is back – or more specifically, on the shoulders. Beautiful. In fact, looking at this kit actually makes us a bit emotional. Moving on…

Italy’s home kit may not be ‘quite right’ but their change strip more than makes up for it. The central crest, the use of the Italian flag, the subtle sleeves – mwah. It even makes V-necks look good.

Great football kits are rarely inspired by cycling jerseys. Do correct us if we’re wrong. Adidas, however, cocked a snook to us doubters with a sublime away kit for Belgium’s Euro 2016 campaign, in a nod to the country’s proud history of being quite good on two wheels. It’s superb.