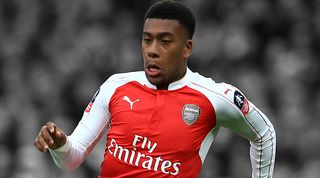 The fans called for Wenger to give Oxlade-Chamberlain more playing time, and with a spate of injuries wiping out his favoured playmakers the Frenchman has handed the England international three successive starts.

But, with Wenger moving his team around to suit the opponent and occasion, Oxlade-Chamberlain has played in a variety of positions – and this lack of consistency has disrupted the player’s rhythm. Knowing he has to seize this opportunity before the likes of Alexis Sanchez, Jack Wilshere, Santi Cazorla and Danny Welbeck return from injury, he’s almost trying too hard when he’s out on the pitch.

Deployed in one of the central midfield roles in a 4-2-3-1 against Sunderland on Saturday, the England man was eager to impress, demanding the ball and driving the team forward. Though clearly lacking in confidence his performance was promising, if a little erratic. At times he would dribble straight into trouble like an out-of-control speedboat careering into rocks.

While Oxlade-Chamberlain’s ability to make the right decision in possession often deserts him, his bravery can never be questioned. He’s always looking to take risks and make a difference, and overcame a poor start to hit the post in the second half. He then played an exquisite pass with the outside of his boot to Hector Bellerin on the right wing, who set up Olivier Giroud for the third goal.

Like many of Arsenal’s talented players Wenger has to find a way to crowbar Oxlade-Chamberlain into his team. And, like many of Arsenal’s talented players, his best position is behind the striker. Unfortunately for the England hopeful that’s a position covered well by the north Londoners’ top guns – and until he finds his natural slot in Wenger’s system, he’ll forever be on the fringes fighting for his manager’s approval.

Wenger handed the 19-year-old a start, challenging the promising Nigerian to make his mark in the first team. Iwobi might be the nephew of Jay-Jay Okocha, but his style and swagger is more akin to Arsenal cult hero Nwankwo Kanu.

With his slouching socks barely held up by his shinpads, he had the courage to run at Sunderland’s defenders when the temptation to play a simple pass in front of 60,000 might have been easier. This approach had mixed results. Sometimes he conceded possession cheaply, sometimes he treated the crowd to a flash of brilliance – like in the 25th minute when he skipped through a cluster of Sunderland defenders and prodded the ball across the box only for Sebastian Coates to deflect it behind.

Later, he picked up possession and drove forward with conviction before laying it off to Theo Walcott, who teed up Joel Campbell for the Arsenal equaliser. With the Gunners searching for a winner Wenger replaced the tiring Iwobi with Aaron Ramsey in the 67th minute, and it paid off when the Welshman prodded the hosts ahead five minutes later.

A promising performance from the talented teenager.

In the absence of the combative Francis Coquelin, there’s a spot open for a defensive midfielder in the Arsenal lineup. With his protective tendencies, Chambers is an ideal candidate.

But another indifferent performance from the 20-year-old will have done little to endear himself to Wenger. Tall and elegant, he has a build and skill set similar to Barcelona’s Sergio Busquets, but unlike the Spaniard, Chambers wasn’t as quietly effective.

Time and again he was pushed off the ball too easily and never imposed himself on the game. Some time spent in the gym might benefit the youngster and Arsenal in equal measure. He needs to add some power to his poise.

4. Campbell positive, but not finished package

The Costa Rican has made an impression during his breakout season at the Emirates, and his third goal of the season further enhanced his reputation. The 23-year-old steered a cross from Walcott into the bottom corner with a wonderfully controlled finish. He also fed Bellerin before the right-back laid the ball across to the unmarked Ramsey, who netted to give Arsenal the lead.

Despite the impact he had during key moments of the game, you still feel like there’s more to come from Campbell. When he’s involved he’s impressive, but he lacks the hustle and bustle of Oxlade-Chamberlain and Cazorla, who are constantly busy. With a bit more impetus he could cause even more damage.

Bar the sporadic threat of Jeremain Lens, the Brazilian defender had very little to deal with. When he was called upon he did what he had to do, but really the 25-year-old needs an imperious performance in a big game against a tough opponent to prove himself to Wenger.

6. Gibbs gets forward to good effect

It could be argued that the full-back played Laurent Koscielny into trouble with a short pass that led to the Frenchman gifting Lens and Sunderland possession for the opener, but he was otherwise solid.

Gibbs offered a threat going forward, creating an overload against DeAndre Yedlin, and stung the hands of Jordan Pickford in the first half after latching onto a pass from Giroud.

The much-hyped Reine-Adelaide only had 10 minutes to make an impression after replacing Campbell, but the Frenchman looked to get on the ball as often as possible and even had a half chance on the cusp of full-time after Oxlade-Chamberlain picked him out.

Arteta, meanwhile, isn’t the sort of play to set the game alight, but his experience helped Arsenal see out the result.