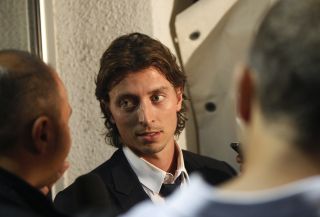 At a time when AC Milan have made headlines for shedding important players, such as Zlatan Ibrahimovic and Thiago Silva, you represent one of the team’s big signings. How does it feel to have signed for Milan after seven years with Fiorentina?
It is a wonderful feeling. There is no doubt that Milan are a great club – they’ve won the most trophies in the world. And my family are Milan fans, so they were very happy when the team announced my signing in May.
I’ve always wanted to play for Milan: it’s been a dream of mine for a very long time. I rooted for Atalanta as a child because Bergamo is my hometown, but my father is a big Milan fan so they were my second team. I believe it was my destiny to sign for them.

What do Milan need to do in order to succeed this season?
We have to work hard, as always, but we also need to start the season on the right foot. Otherwise we could find ourselves in trouble, especially in the race for the league title, as there are so many talented sides in Serie A.

Which teams concern you most?
Juventus remain the team to beat. They are the defending league champions and, alongside us, are favorites to win the title. As always, Inter are also contenders.

Are Juventus the best team in Italy at the moment then?
For me, Milan are the best team. I am hopeful that we can do well this season despite the departures of some players.

Why do you say that?
There is a lot of history that shows Milan can win this tournament. I believe we are second to no one in Italy or Europe, and I really think we can compete with the likes of Barcelona and Real Madrid.

What about the English clubs?
They too will be tough to beat. Chelsea surprised everyone last season and Manchester United are always competing for the trophy. It will be an interesting season.

What about your personal experience of the Champions League with Fiorentina? Is it a bit limited compared to some players? Do you think you’re prepared?
In the end, the Champions League is no different from any other big tournament. I, and the rest of the team, need to approach every game as if it is important. It doesn’t matter whether you play Barcelona or a newly promoted Serie A side such as Sampdoria: a game is a game and on any day you can be defeated.

I’ve had some experience, in that Fiorentina played in the Champions League in the 2009-10 season, and that was great. I remember beating Bayern Munich at home in Florence in the Round of 16: we won 3-2 but lost on away goals. It was a great showing, seeing as the previous season we had been eliminated in the group stage.

Let’s talk about another European competition. Italy reached the Euro 2012 final, only to lose 4-0 to Spain. How does that feel now?
We demonstrated that we could play with the best in Europe, and that is a good sign ahead of World Cup qualifying. We can build on that performance.

As for the final… for starters, Spain are a great team. I don’t think anyone could have beaten them that night. We were in trouble at half-time, being 2-0 down, but the game was over once we lost Thiago Motta to injury and went down to 10 men. It wasn’t our night – that happens sometimes.

It was a tough loss, and it took me a few days to get over it. We really thought we could beat Spain, after the win over Germany in the semi-finals; we’d got better as the tournament progressed. To lose was a shame.

Why did Italy find it so difficult to finish off England in the quarter-finals, only winning in a penalty shootout after dominating the game?
The game against England was a particularly frustrating one for us. They locked down their defence and we tried for 120 minutes to exploit that. We won on penalties, but I think nearly everyone thought we deserved to win that match. To me, it showed that we need to score more goals – that is something the forwards and midfielders need to do more if we want to succeed.

You missed your spotkick in the shootout. What went through your mind?
I got a sinking feeling that we would be eliminated because of my mistake. It was a good thing we had Gianluigi Buffon in goal: he made the difference in that shootout, without doubt. It was a big relief for me. Penalties are a lottery, and to lose in a shootout having played such a great match would have been a cruel way to be sent home.

Was the semi-final hard for you to play, seeing as you are half-German because your mother is from there?
That is always a tough game. It is true that I have a bit of Germany inside me. I spent my summers there every year with my grandparents. I had some great memories of them.

Is that why you had a small German flag stitched into your boots throughout the tournament? How did your team-mates find that?
I’ve had no questions as to where my allegiance lies. That was an homage to my mother and my grandparents, and that’s all. I’m Italian, I grew up in Italy and I am a member of the Italian team. I’d say I am 90 per cent Italian and only 10 per cent German.

Italy coach Cesare Prandelli is someone you know well, as he coached you at Fiorentina for five seasons. What do you think of him as a manager?
He has been more than a manager to me; he has also been a teacher and a mentor. He has helped me a lot throughout my career. He has worked very hard over the past two years: he brought a sense of calm back to the national team after the failure at the 2010 World Cup. He is a big reason why Italy did so well at the Euros.

Do you agree that the current Italy team plays a lot differently to the one that won the World Cup in 2006 and the one that went out in the first round in South Africa two years ago?
Yes: he is not afraid to attack and move players around. He wants us to play a more open game, and that has been good for us. I wasn’t used to playing as an attacking midfielder or even as a playmaker – with Fiorentina, I usually played as a withdrawn midfielder or on the wing covering back to help the defence. With Italy, Prandelli was trying new, more offensive tactics at the Euros, and I was there to help out. It’s not a position I am used to playing in, but I’ve learned to adapt so I can help the team out in any way possible.