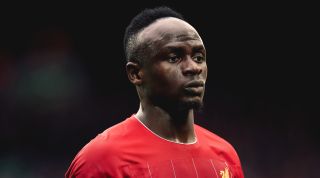 Jordan Henderson likely would have been Player of the Year this season. Henderson’s journey to the top of the game has been emblematic of his team’s own ascent and, had the world been working as normal, that duality and all the intangibles contained within would have proven irresistibly seductive when the time came to vote.

Individual awards invite arguments. Particularly in this case, when one team has been so overwhelming superior to all the others and when there are so many different reasons for their success.

Who has been Liverpool’s most valuable player this season? That answer depends on all sorts of variables and also the weights attributed to the different departments of the game. In other words, it’s a question without a definitive answer.

But who has been their most enthralling and entertaining player, the one who even most neutrals have been charmed by?

Do we talk enough about Mané? I don’t think we do. Beyond just dwelling on his chemistry with Mohamed Salah and Roberto Firmino, do we spend enough time daydreaming about him and his talent, or considering how unusual it is?

Literally – perhaps - because fourteen goals and seven assists from just 24 starts in 2019-20 is a remarkable level of productivity. He’s also part of an attacking trident that, collectively, has become the benchmark for attacking football in Europe. By that measure, he’s a superstar of the game and widely recognised as such.

But in a more anecdotal sense, we don’t, because he has a range of abilities seldom seen in the Premier League, which bear almost no comparison with anyone else, and yet we don’t dwell on that in the way that we might or as we have done with others in the past.

Mané is compelling because he has no trademark. Most goalscorers have a trait or a habit, be it Salah opening his body up and looking for the far corner, or Sergio Aguero’s short, sharp backlift, or even the way Jamie Vardy slams through the back of the ball.

Mané doesn’t. He doesn’t have that kind of signature.

What sounds like a weakness is actually a great strength. Looking back over his goals now, it’s interesting just how many of them involve unusual moments or pieces of skill which a defender couldn’t possibly have anticipated.

The chip against Bayern Munich in the Allianz Arena and that winding run and fizzing drive at the Emirates, his very first for the club, are the obvious examples. In each of those instances, he really created the opportunities for himself, befuddling his opponents at the critical moment with improvisation or an unusual choice.

Sadio Mané vs Bayern Munich at the Allianz Arena is the best individual performance by a Liverpool players in 2019 for me. World class winger with elite mentality. pic.twitter.com/s8t9Do67rADecember 31, 2019

Or the backheel against Watford. Or the volley against Spartak Moscow. Or that strange, lofted finishing against Tottenham at Anfield, which he steered into the net as he was falling over.

These goals don’t just describe his technique, but also the speed with which he seems to process the game around him. Among the many others, these moments depict a perfect marriage between a player’s range of abilities and his understanding for when and how to use them.

That’s perhaps what gives him that unpredictable edge. They create that dexterity of his, which means that he opts for power when everyone’s anticipating placement, and vice versa. It’s probably also what often makes him such a startling player to watch; he’s full of contrasts and there’s never a sense of knowing what he’s about to do next. He’s like a boxer who knows how to disguise his punches.

He’s also that very rare commodity: an extremely dynamic player, but one who is also highly composed. More often, a footballer is one or the other. In Mané, however, Liverpool and Jurgen Klopp have someone who can not only bully a team with his physical and technical attributes – his acceleration, his skill – but who can also be relied upon to make the right decision at the right moment.

Or to make the right run. Or to choose the right finish. Or spot a weakness that someone else can exploit. In other words, he can kill with precision or blunt force, with stealth or great violence.

The easiest way to illustrate that point is just to direct you towards those goals. They describe his range and his abilities vividly. What they also show is his rarity. How many players can bludgeon a ball into the top corner with their wrong foot from 20 yards? How many who have such ability with the ball at their feet are as good as he is in the air?

How many who are as quick as he is across the ground also have a mind that can keep pace?

Very, very few. The portrait, then, is actually of a unique player and yet, strangely, one who sometimes seems to get lost in the Liverpool crowd.

Is he the Footballer of the Year? Who really knows? In fact, with the world as it is, what does it really matter? But beyond concepts like worth and importance, or even statistical metrics, he might be the Premier League’s biggest spectacle and, at a time when everyone’s missing sport, that might be the most valuable commodity of all.