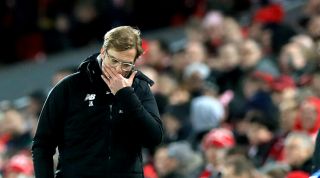 A really exciting game, if you were able to forgive the many, many intrusions by the VAR - which, incidentally, remains clunky and poorly used thought out. Anyway, Liverpool are out. West Brom deserved their win, defending better and attacking with a precision which they were desperately short of during Tony Pulis's tenure.

Liverpool? Same old, sadly, for the home support. At the end of a week which started with them losing to Swansea, this defeat will re-animate the conversation about their defence and, more precisely, Jurgen Klopp's inability to fix it.

Tottenham survived a mighty scare in Wales. Padraig Amond's header had - quite deservedly - given the minnows the lead and for a long time it looked as if they might hold on. Spurs created very little and only after introducing Dele Alli and Son Heung-min from the bench did they begin to exert proper pressure. Eventually it told: Harry Kane tapping in at the back-post after Son's clever near-post flick. Newport are rewarded with a replay at Wembley.

The air went out of this tie quickly. Fousseni Diabate gave Leicester a fast start with a neat, prodded finish before, three minutes later, Kelechi Iheanacho curled a low shot beyond Jonathan Bond to make it two. Iheanacho would add a third inside half-an-hour, effectively ending the contest. Even with Andrew Hughes grabbing a consolation shortly into the second-half, Diabate would add his second of the game late on to restore some gloss to the scoreline and, in injury time, Wilfred Ndidi scored a fifth.

Steve Mounie gave David Wagner's side a first-half lead, meeting Florent Hadergjonaj's header perfectly to beat David Stockdale in the visiting goal. Birmingham would level the game shortly after half-time, with Lukas Jutkiewicz finishing well after a mistake by Michael Hefele and that would end the scoring. Replay needed.

Not a classic and few signs that Brighton are properly invested in this competition - Chris Hughton made all sorts of changes to his starting XI, fielding a virtually unrecognisable defence and a makeshift attack. Middlesbrough didn't take advantage though and, with almost the final kick of the game, the ball ricocheted off Glenn Murray and in. Brighton through to the next round.

A turgid game throughout most of first half, but Luciano Narsingh put Swansea ahead in stoppage time. The visitors had deserved their lead - just - but wasted little time in surrendering it, with Jon Stead (remember him) equalising from close range at the beginning of the second-half. Back to the Liberty Stadium they'll have to go - another replay needed here.

Not quite the start that Javi Gracia had in mind, with Jack Stephens giving Southampton the lead within four minutes after a Shane Long shot had deflected to him. Watford huffed and puffed but with little impact and Southampton are through, gaining a modicum of revenge for what happened in the league game two weeks ago.

Will Grigg opened the scoring here, thudding a header past Joe Hart ("...your defence is terrified..." etc). It was a lead which Wigan would take into the break and it got worse for West Ham soon after the restart, when Arthur Masuaka was shown a straight red card for spitting at Nick Powell. West Ham were condemned to an embarrassing exist on 62 minutes, when Grigg doubled his side's lead and his own tally, converting a penalty harshly awarded for handball. Laughably poor from the visitors.