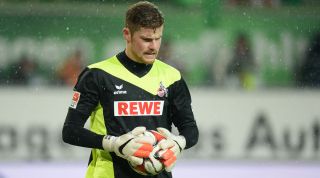 In his first-ever Bundesliga season, 21-year old Timo Horn has broken two prestigious goalkeeping records and is the main component of what started out as an impenetrable defence for promoted FC Köln.

Horn went 365 minutes without conceding a goal in the German top flight, keeping four successive clean sheets in the process – a feat not matched by any Bundesliga goalkeeper in their first four games.

In this, his second full season between the sticks in Cologne, young Horn has stamped his authority in a league currently blessed with several top quality goalkeepers.

A German call-up is on the horizon, so it’s no surprise that clubs like Liverpool, with their own big problems in the goalkeeping department, are interested.

Sadly for the Merseyside club, the hometown boy isn’t planning a move away from Germany for some time. Only last week, Köln’s No.1 signed a three-year contract extension at the Rhein Energie Stadion, keeping him in Germany until 2019.

Bild have reported that Horn’s release clause was doubled from €4.5 million to €9m upon signing the new contract, but Köln may have to sell him sooner rather than later. With an apparent debt of €25m, the Billy Goats need all the money they can get, which may mean their young glovesman leaves the club prematurely.

Köln’s vice president Harald Schumacher – who played over 400 games between the sticks for the club – has given Horn his vote of confidence and commented on the similarities between himself and the 21-year old.

“I see a lot of myself in Timo” said Schumacher. “We always had players who could control the ball and use their pace to attack quickly, so getting the ball to them as soon as possible was always important. It’s the same for Timo and he does it superbly.”

Schumacher is also a big admirer of the young goalkeeper's loyalty to Köln. In September last year, Horn told Bild: “I can well imagine staying at Köln forever. I never said it as a joke. I don’t need to go abroad in order to be happy as I have everything here. A club, my family, my girlfriend and friends.”

He’s also loyal to the German Under-21 team and proved it by moving his wedding six months forward to the New Year, so that he can play in next summer's European Championship.

Horn has become known for his ability to claim crosses confidently and begin quick counter-attacks with his long throws and arrow-like kicks. He has claimed every cross he has attempted this season (44) and has completed 62% of his throws and kicks out from goal – something Schumacher prided himself on in his time.

The young net-minder is also known for his speed. When he doesn’t hold onto a shot, more often than not he’s first to react and gather the ball. More important than anything for a goalkeeper, of course, is his shot-stopping ability. Only Roman Bürki of bottom club Freiburg has made more diving saves than Horn in the first half of the Bundesliga season (25).

He’s also wisely watching a lot of the world's best goalkeeper and fellow German, Manuel Neuer. “He has set a new standard for goalkeepers around the world," said Horn. "I look scarily at many videos of top goalkeepers. Of course I’m trying to orient myself to Neuer’s game. I know I still have very, very much to learn.”

While Horn has proven himself to be a sound shot-stopper and also quick to react when the ball is around him, his ability to hold onto shots has come under question in recent weeks.

Horn fumbled a free-kick from Hakan Calhanoglu in Köln’s 5-1 defeat to Leverkusen at the beginning of December. Karim Bellarabi was able to pounce and score, but Horn was defended by his manager Peter Stöger, who said: “Timo has saved us many times. In this situation, I look at the defenders who didn’t follow up the free-kick to clear if Timo did spill the ball.”

Germany U21 coach Horst Hrubesch is currently blessed with a selection dilemma as he looks towards the European Championship next summer, with Marc-Andre ter Stegen, Loris Karius and Horn currently available for selection.

“It’s fantastic to see so many talented goalkeepers being produced throughout Germany and each of them have great promise,” said Hrubesch. “Ter Stegen is already with Barcelona, and Karius and Horn I’m sure will be attracting big moves soon.

“Players are selected on form, and Horn and Karius especially deserve their places. Horn’s been one of the, if not the best keeper in the Bundesliga so far this season.”

Back in 2012 at 19, when Horn was first making his mark as Köln’s first-choice goalkeeper, he revealed the secret behind his good form. “Sure you feel tense before a game, but I feel no pressure. I’ve been working with my mental coach on hypnosis. So I’ll take a few minutes before I game to release myself mentally and have only one focus.”

He added: “I’m too quiet on the pitch. I want to be louder and I want more to come out of me. During the week I’m doing two more personal training, strength and flexibility exercises. These are areas which define a goalkeeper physically, but I have to be strong mentally too.”

For Horn, right now everything is perfect. An assured start to the season with Köln has meant the Billy Goats are expected to comfortably survive after their return to the top flight, with their keeper a vital part of their superb start to the season.

With a new contract under his belt to boot, Horn can continue impressing potential suitors to lure them into a possible summer move. However, like any hometown boy, he knows where his heart lies. Only a special team could lure Horn from home.