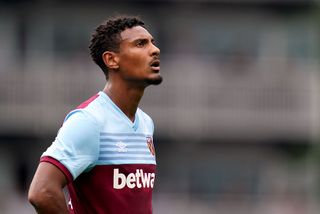 When Sir Geoff Hurst heard that West Ham United had signed Sebastien Haller this summer, his thoughts instantly turned to 1966.

“A West Ham fan texted me and said we’d bought a player called Haller,” Hurst tells FourFourTwo. “I went back to him and said, ‘Is that Haller who scored for Germany in the 1966 World Cup Final?!’”

It wasn’t Helmut Haller, of course, but a 25-year-old Frenchman who joins Hurst’s former team for a club record £45m. A target man who impressed greatly for Eintracht Frankfurt in the Europa League last season, expectations are high that he can hit the ground running at West Ham.

After starting slowly in Manuel Pellegrini’s first season in charge, the Hammers finished 10th in the Premier League last time around but lacked a genuine focal point at times. The now-departed Marko Arnautovic was top scorer with a respectable but not earth shattering 10 goals.

“Haller looks like a good addition, although you can never tell how a player is going to settle in - particularly when they come from another country,” says Hurst, who scored 242 goals for West Ham between 1959 and 1972 - as well as hitting the hat-trick that won England the World Cup.

“He’s got a couple of goals early on, and he looks like a striker who’s going to do well for us, but it’s about the whole squad. It’s a more settled squad this year. As all fans are about their club at this stage, I’m hopeful we’re going to have a good season: a comfortable season, in the top half most of the time.

“Wolves came up from the league below and were well above halfway for most of last season, and that’s a team we’ve got to try to emulate. We want to be up there, just knocking on the door of the top six for most of the season - to be above halfway right from the start, playing good quality football, beating good teams and having a cup run.”

Hurst saw promising signs in Pellegrini’s first season, although was irked that they missed the chance to go far in the FA Cup - surprisingly losing 4-2 at League One strugglers Wimbledon in the fourth round.

“We started off very badly last season - we were at the bottom because we lost four games,” says the 77-year-old, speaking to FourFourTwo at the FA and McDonald’s Grassroots Awards at Wembley. “It was a strange season in that we won against some of the big boys and lost against some of the lesser teams. But we progressed, and finished comfortably. There were a lot of changes when the new manager came in, but it’s more of a settled squad now.

“We’ve still got a bit to do in terms of the top six but we want to be comfortably placed and having a cup run, particularly after last year. Some of the big boys were knocked out, and it finished up with Watford against Wolves in the semis. There was an opportunity - that was the most disappointing aspect of last year. We were comfortable placed in the league and it was a great chance for a cup run, but we got stuffed by Wimbledon 4-2. I was really annoyed by that. But I’m hopeful it’s going to be a better season this time.”

Read more from Hurst about his playing career in the next issue of FourFourTwo, out on September 3.

The FA and McDonald’s Grassroots Awards National Ceremony rewards volunteers who keep the grassroots game going. To participate in the Fun Football programme, go to mcdonalds.co.uk/FunFootball