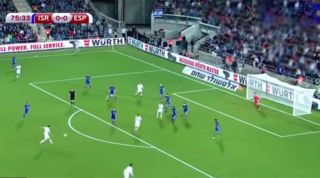 In a dead-rubber contest lacking entertainment on Monday night, Illarramendi provided a bright spark in the 75th minute.

The 27-year-old broke the deadlock when he met an Israeli clearance on the edge of the penalty area before driving a venomous half-volley towards goal.

Such was the technique of Illaramendi's strike that the ball ended up nestling inside the side netting.

Illarramendi is currently at Real Sociedad, where he is enjoying his second spell after an unsuccessful three-year stint at Real Madrid.