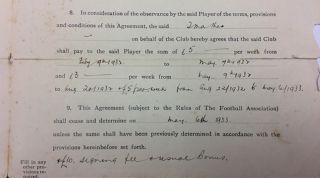 When Matthews was 17, he signed a professional five-year contract with Stoke which consisted of a weekly £5-per-week pay packet.

The Stoke Sentinel are reporting that the contract signed by the England legend, who scored 51 goals for the Potters from his outside-right position, is now up for grabs at sports memorabilia auction Hansons auctioneers, Derbyshire, on August 22.

We won't bore you silly by telling you how Matthews' earnings stack up against Neymar's current wage...