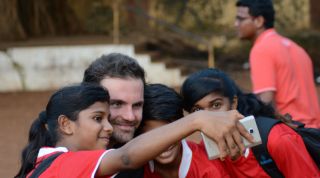 Juan Mata wants players to sign up to the Common Goal initiative, whose ambition is to filter the money to over 120 grassroot football charities in 80 countries around the world.

The movement, set up by streetfootballworld, have estimated that football's total revenues equal $30 billion a year, and would like to take one per cent of that for the greater good.

“What we’re trying to do is define a shared social agenda for football,” Mata explained. “Common Goal goes beyond individual brands and egos to deliver a greater impact. By making the pledge, we can form a lasting connection between football as a business and football as a tool for social change.”

As Common Goal’s first member, Mata is now looking to assemble a ‘starting XI’ of like-minded players who make the one per cent pledge to lead the movement forward.

Mata added: “One of the first lessons I learned in football is that it takes a team to win a game.

“We live by this mantra on the pitch, yet we rarely see it play out in the social impact space, which is dominated by individual initiatives. Through Common Goal we’re creating a collaborative way for football to give back to society. I urge my fellow players to get involved.”

Somebody get Neymar on the phone.