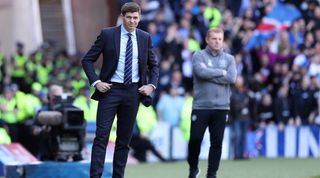 Rangers fans can be an excitable bunch. That, quite often, is to their credit. There aren’t many clubs that would have regularly filled a 50,000-seater stadium while in the lower leagues merely on the promise that better things were coming again. At other times, though, it has been the mark of desperation. It was difficult to know in which way to interpret the reaction to Steven Gerrard’s appointment as Rangers boss last year.

Not since the heady days of Paul Gascoigne, Brian Laudrup, Giovanni van Bronckhurst, Arthur Numan and the like had the Ibrox side welcomed such a world renowned legend of the sport. And yet Gerrard, paraded to thousands of hyped fans inside the famous, old Govan ground after his media unveiling, arrived as a complete managerial novice.

In some ways, a lot has changed since then. Gerrard has gained more experience in one season than most managers get in five. Such is the nature of the Glaswegian football-sphere. But in other ways, the former England and Liverpool captain finds himself in exactly the same place he was this time last year – with a point to prove.

Gerrard was set a number of targets upon taking over at Rangers. He was expected to qualify for Europe, which he did within just a couple months, leading the Ibrox outfit to the group stages of the Europa League, where they came within just one game of making the last 32. Second place in the Scottish Premiership was another target, and so a box was ticked when Rangers achieved that goal with fixtures to spare.

Celtic and Rangers in the ‘90s: When the Old Firm felt (even) bigger

The biggest black mark against Gerrard to date has been in his failure to challenge in the cup competitions, with Rangers knocked out in the semi finals and quarter finals of the League Cup and Scottish Cup respectively. On both occasions, Aberdeen have been Rangers’ eliminators. That did not go down well, prompting much soul-searching each time.

If the league table is to be taken as the ultimate gauge of Rangers under Gerrard, though, there has been progress. They have tallied more points than they did last season, scoring more goals and conceding fewer. But it’s in the assessment of the last, and most important, objective that there is the most ambiguity.

Gerrard’s biggest task was to close the gap on Celtic at the top of the Scottish game. Six points stands as the current difference, which is markedly down on the 12-point gap between the two teams last season and the massive 39-point gulf the season before that. But when this target is spoken about – ‘closing the gap’ has become a Scottish football colloquialism in recent times – are points the only measure?

Celtic still managed to win the title, their eighth in a row, at a canter this season. The ribbons were tied on the trophy with two games left to play, although that was only a formality. It was clear that Celtic would be champions once again from early March, when Rangers’ inconsistency really let them down and their manager suffered something of a meltdown, publicly lambasting his own players on a near weekly basis. Does that truly count as closing the gap? Is that enough?

Having swung back and forth between three different managers in just two seasons, Rangers needed a longer-term project to commit to. They have found that in Gerrard. Sunday’s Old Firm derby win, Rangers’ second of the season, fortified the platform that has been built, but much more will be expected of Gerrard after the summer. There must be no ambiguity in his assessment this time next year.

Quiz! Can you name the players who've featured in the Premier League AND scored a Champions League hat-trick?