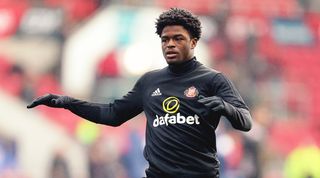 The new series of Sunderland 'Til I Die does not reflect well on Josh Maja. Actually, it doesn’t reflect well on all sorts of people, including but not limited to Stewart Donald, Charlie Methven, Jack Ross, and almost everyone who appeared in Season One of the Netflix documentary.

And the fan who squares up to Chris Coleman in the stadium car park.

But Maja has a particularly hard time as – spoiler – his early goalscoring form in 2018/19 becomes so rich that the club find themselves unable to convince him to sign a new contract. Their attempts are rebuffed by his agent and the player finds himself, at one toe-curling point, promising local residents and even young children that - yes - he’ll definitely back to turn on their Christmas lights next year.

Which he won't, because he leaves for Bordeaux a few weeks later, taking Sunderland’s automatic promotion hopes to Ligue 1 with him. The documentary was released on Wednesday morning and by lunchtime, ominously, Maja was trending on social media – and in exactly the way and alongside the sort of terms that you might expect.

One of the scenes in which he takes part is deeply uncomfortable to watch. The film crew corner him in the club gym and are asking about the rumours surrounding his future. Maja, obviously privy to information and intentions that they are not, becomes nervous and evasive and - interpreted in a certain way - possibly even smug. When the subject of his new contract comes up, he also suggests that he’ll be signing it soon when - of course - we know that he has no intention of doing so.

He doesn’t quite say that he's going to stay, but it’s the implication – and in hindsight it makes him look fairly dishonest.

But the scene's importance is its ambiguity, because it describes the positions that young footballers are often put in. There’s even another in which one of Maja's teammates, Luke O’Nien, talks about the pressures of being a young player and the many opinions and perspectives – solicited or otherwise – which have to be tolerated and entertained with the territory. O’Nien was talking in general terms, but what he was alluding to was fairly clear: in a situation like Maja’s, there are all sorts of pressures to cope with and people to appease.

Among many supporters, there's an assumption that the player himself is always the driving force in his career’s direction. That's derived from the idea of 'player power' and that old construct of the unthinking, unfeeling, mercenary professional, but that's a fairly outmoded cliche.

Even at that level of the game, he's really just a shop front. The individual is the public-facing part of a mini-corporation and it would be naïve to assume that he is entirely in control of his future. Behind the scenes are family members and friends, and of course agents and hangers-on. Whether that properly describes Josh Maja's circumstances specifically is another matter - who knows, even now that remains vague - but it’s something which should always be considered before a young player is vilified. Or labelled as disloyal or selfish or greedy.

Some are the stories are awful. You don’t have to dig far beyond football’s surface layer to find tales of players being denied moves (which would suit them) because their agent wasn’t making enough from the deal, or being pushed out of one club and into another to satisfy the financial aims of an outside investor of some variety. While everyone has the time, it’s worth recommending Football Leaks, the book by Der Spiegel’s Rafael Buschmann and Michael Wulzinger, which explores – among many other case studies – the real forces which drive the transfer market and just how murky a business it can often be. Such context is invaluable.

Really, because the he player is always the focus. He is what everyone sees and the natural target for the frustrations (and sometimes betrayals) that supporters often feel. But in many cases, these are young, impressionable men who can be told what to do, or can be sold solutions to problems which don't always - truly - prioritise their best interest. Not always, but often enough to warrant some restraint in these individual cases.