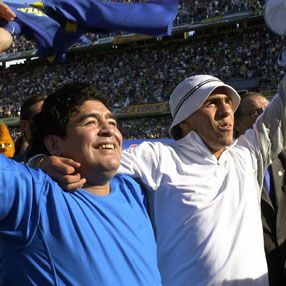 In an Inside United exclusive, Manchester United 'sCarlos Tevez tells us about his friendship with Diego Maradona and why his Argentinian compatriot remains the greatest no.10 of all.

“Diego, for all Argentinians, is God. And he always will be,” Carlos Tevez smiles, shaking his head in wonder at the mention of his nation’s unofficial deity. So striking is his reverence, it’s hard to believe he’s talking about one of the contacts in his mobile phone address book.

They say you should never meet your heroes, but Carlos has gone way beyond that.

The Carlos-Diego story began long before the pair even met, thanks to the popular Argentinian pastime of dubbing future stars ‘the new Maradona’. It’s a burden thrust upon any burgeoning young talent since the great man’s retirement a decade ago,  and while many have buckled under the phenomenal weight of expectation,  Tevez has simply shrugged off the parallels. He’s had to: for they are, in truth, impossible to ignore.

Both Tevez and Maradona are the product of tough upbringings in Greater Buenos Aires shanty towns; Diego emerging from Villa Fiorito to the south of the city, Carlos hailing from Fuerte Apache in Ciudadela, a western province, annexed by General Paz Avenue. Maradona joined Argentinos Juniors aged just 11 before moving to boyhood club Boca Juniors a decade later. Tevez spurned the former’s advances in order to sign for Boca at 11, then rose through the club’s youth ranks while juggling duties as the club’s head ballboy.

Comparisons between the pair were hardly quashed by Tevez’s first-team debut. On the face of it a 1-0 defeat to Talleres de Cordoba seems unremarkable,  except for the fact that Maradona’s own Boca bow, in 1981, brought an identical result against the same opposition. Tevez admits that he mimicked his hero’s movements during his formative years, and as a result the similarities extend to a visual likeness – both players are squat in physique, but are at their most recognisable scurrying out of tight situations with explosive sprints and slaloming dribbles.

The defining Maradona moment for many, including Tevez, came against England at the 1986 World Cup. “The goal against the English was amazing,” chuckles Carlos, again gazing into the distance. “It was something only a genius could do.”

While Maradona’s first goal in that quarter-final clash – the infamous ‘Hand of God’ punch past Peter Shilton – was, in the eyes of the English at least, cheekily attributed to the intervention of a higher being, there was no doubt the second was sent from heaven. Picking the ball up just inside his own half, the pocket genius weaved at breakneck speed past six English opponents, and finally a despairing Shilton, before tucking the ball into the net.

In Argentina the goal is known as ‘The Cosmic Kite’, and it regularly tops worldwide polls as the greatest in history. It was the undoubted peak of a career which catapulted Maradona to superstardom in his homeland.

It’s little surprise, then, that Tevez can vividly remember meeting him for the first time.

“It was a Sunday afternoon and we (Boca) had just drawn 2-2 with San Lorenzo,” he recalls. “I went to a TV show afterw�ards and he was also appearing as a guest. What can I say? It was just a fantastic feeling to meet el Diego, the man. It was incredible for someone who grew up worshipping him!”

This was far from your reader-meet-hero starry eyed encounter, however; Maradona had openly voiced his admiration for Tevez before their meeting, describing him as “an Argentine prophet for the 21st century.”

The pair instantly struck up a fond friendship, and remain in touch despite Tevez’s move to England. When Carlos returned to Buenos Aires over the summer,  one of his first people he looked up was Maradona, a visit which will be reversed sometime in the near future.

“I have a great relationship with Diego,” he reiterates. “He has even promised me that he would come and see me in action in Manchester, so I will look forward to seeing him again. He helped me become what I am today.”

So, if you should see Carlos beaming and mouthing something toward the stands during a game this season, he’s probably just having a quick chat with God.