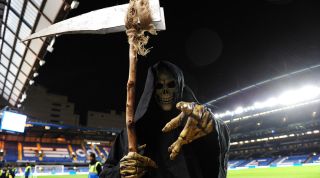 Before Crawley Town’s League One trip to Carlisle United in November 2013, the local policing unit that travelled with the Crawley fans to away games made a rather strange request: do not touch the Cursing Stone.

On the granite stone, standing in the Cumbrian city’s Millennium Gallery, is written a curse placed on the notorious border Reiver bandits by the Archbishop of Glasgow in the 16th century. The stone, put on display in 2001, was believed responsible for many subsequent misfortunes; the foot and mouth epidemic, floods, and even Carlisle United’s relegation into the Conference in 2003/04.

No Crawley fans touched the stone, Billy Clarke secured a valuable point with an 88th-minute equaliser, Crawley ended the season in mid-table and Carlisle were relegated again.

Last Halloween, Spurs TV told Sandro they wanted to interview him. The Brazilian midfielder stood in a dimly lit, spooky room, with a camera pointing at him, waiting for the questions to start, when suddenly, from behind a curtain at the back of the room, Death appeared. Or should that be team-mate Kyle Walker? Sandro, startled, wrestled his scarer to the floor. Cue manic laughter, and a vow from Sandro that the Beast (er, that would be Sandro) would get his revenge.

Andros Townsend got the same treatment and jumped out of his skin. So too Jermain Defoe, who wore his own Halloween mask, Kyle Naughton and Steffen Freund. Only Jan Vertonghen was unfazed by the prank. When confronted by Death, the Belgian defender looked nonchalantly up from his iPad, stood his ground and when he realised what was going on, broke into a quizzical half-smile. Stephen King take note.

3) Scared of the dentist

In 1948, Colombian club America de Cali decided to turn professional. Benjamin Urrea, a local dentist known as Garabatto (or beanpole) was not impressed. He promptly put a curse on his team. Turn professional if you like, but you’ll never be champions, he told them.

The club had won five regional championships in the 1930s, but struggled in the national league over the next three decades.

In 1978 a group of season-ticket holders fed up with the team’s poor showings, including Garabatto himself, performed an exorcism to lift the curse. The very next season, America won their first national league title.

4) The curse that keeps on cursing

In 1906, Birmingham City moved from Muntz Street to St Andrew's. They kicked some gypsies off the land, who in turn cursed the club for the next 100 years.

City’s first game at the ground was snowed off, and they were relegated at the end of the 1907/08 season. For the next 100 years and counting they would be the poor relation to neighbours Aston Villa.

Ron Saunders hung crucifixes on the floodlights to get rid of the curse, while Barry Fry urinated in all four corners of the ground. Nothing worked. In 2006, the curse’s final year, Birmingham were relegated again.

The following season, the first without the curse, the club diary honours page suddenly showed that City had won seven league titles, seven FA Cups, the European Cup and the European Super Cup. Had the curse been blocking these Birmingham triumphs from everyone’s minds all this time? Unfortunately not – the local printers had included Aston Villa’s honours list by mistake.

Before it was the Jimmy McIlroy Stand, Turf Moor’s easternmost side was called the Bee Hole End. It had been built on the site of the old Bee Hole mine. Long before Burnley moved to Turf Moor in 1882, a strange creature was said to lurk thereabouts: the Bee Hole boggart.

A boggart is a malevolent fairy that follows a family and causes things to disappear. They are common folkloric figures in northern England, and the Bee Hole boggart was a particularly nasty specimen. It is said to have snatched a local woman called Old Bet, leaving only bits of her skin on a thorn bush. Makes Sean Dyche look like the sugar plum fairy.

Bolivian team The Strongest, from La Paz, were 2-0 up against Uruguay’s Defensor Sporting during their Copa Libertadores match last April, when TV cameras spotted a strange shadowy figure running at speed across the lower terrace of the home team’s Hernando Siles Stadium.

During second-half stoppage-time, with the Defensor goalkeeper about to take a goal-kick, the ghostly shadow ducks and weaves his way through the sparse crowd and eventually passes straight through a line of onlookers and a crash barrier before disappearing into thin air.

It takes a lot to sneak up on Dante when he’s on the ball. His own awareness notwithstanding, should unseen trouble stir, Philipp Lahm or Jerome Boateng would alert the Brazilian with a quick "He’s behind you!".

But not even the most eagle-eyed defender could have spotted the ghostly figure that sped up to the Brazilian just before half-time during last May’s DFB-Pokal Cup Final against Borussia Dortmund at Berlin’s Olympiastadion. TV viewers saw the shadowy figure glide past the stopper and then disappear over the halfway line. Maybe Dortmund’s Yellow Wall had conjured up the unquiet spirit of Charlemagne, ancient king of the Franks, out of protest at the sale of Mario Götze and Robert Lewandowski to their arch rivals.

8) Keep the doctors away

Then the government decided not to pay the witch doctors. But if you don’t pay the piper you can expect trouble, and sure enough, for the next 10 years Ivory Coast won nothing. Then, the Defence Minister decided to pay each witch doctor $2000, and asked them to work for the team again. Since then Ivory Coast have still won nothing while Didier Drogba, Yaya Toure and many others have followed the pound signs all over Europe.

Kingston Cemetery, Portsmouth. In August this year, mourners were spooked by ghostly noises coming from behind the gravestones. Police were called and discovered not the spirit of Jimmy Dickinson, but the very much alive 24-year-old Anthony Stallard. He’d been kicking a football around, damaging some of the graves and pretending to be a ghost.

Stallard had been running around waving his arms, making 'wooo' noises and throwing himself backwards. His claims that he was celebrating rumours about Jurgen Klinsmann taking over as manager at Fratton Park were given short shrift by the police.

Stallard was charged with using behaviour likely to cause distress. Reports that Portsmouth fans hoping to bring similar charges against former Pompey owner Alexandre Gaydamak have yet to be confirmed.

On 27 October 1954, Fiorentina reserves were playing Pistoiese at Stadio Artemio Franchi, when some strange shapes appeared in the sky over the stadium. There were several large cigar-shaped flying objects, witnesses said. And there were more than 10,000 witnesses. The sky was blue and clear. Fans, players and media watched the objects dart about in the sky, and brightly coloured glitter fill the air.

What did they see? UFOs? Hi-tech military aircraft? Swamp gas? Or just the advance party from Planet Balotelli heading southwards towards their landing base in Palermo?