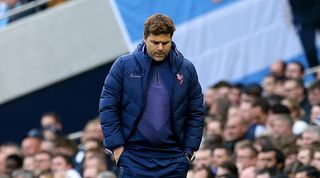 It's been a season that perhaps Tottenham Hotspur fans will want to erase from memory. Unfortunately for them, Amazon have released the first trailer for their long-awaited documentary, All Or Nothing.

Last time around, the Amazon Prime crew followed a season of relative plain sailing in Eastlands, as Manchester City cruised to a title amassing 100 points and sweeping all before them. The doc was well-received by fans from all corners - not just City's - as it showed never-before-seen glimpses of half-time team-talks, players going through rehabilitation and Benjamin Mendy doing Benjamin Mendy things on the daily.

While Tottenham have not delivered the same successes as City this season, it's fair to say the cameras have had a lot to cover.

In their first full season at their new stadium, Spurs fans have seen their side battered 7-2 by Bayern Munich, fire Mauricio Pochettino and bring in the world's most famous manager. That's just the opening credits, too: Jose Mourinho has apparently fallen out with club record signing Tanguy Ndombele, breached lockdown regulations to train with him, and most recently, watched on as Son Heung-min and Hugo Lloris have fought on the pitch - not to mention Eric Dier's incident of wading into the crowd against Norwich City in the FA Cup after the match. Phew.

It's not all been bad though. Tottenham have enjoyed a vintage win over Manchester City - complete with Mourinho madness of tightly screwing up his bottle lid before berating an official - and that Son goal at Burnley. It could get even better this weekend as Jose's men host Arsenal in the first North London Derby at the new ground.

Has there ever been a more explosive football documentary? Let's see - a release date is yet to be revealed.