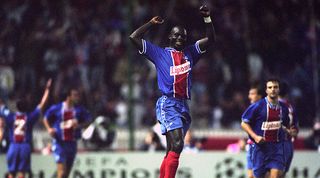 One of the easiest ways to separate true football fans from those that ‘consume’ the game via YouTube and Instagram is to simply listen to how they talk about Paris Saint-Germain.

Contempt for PSG’s current petro-fuelled incarnation is entirely justifiable, but if you ever hear anybody writing off the club as "lacking pedigree" and "having no history"… well, write off the speaker instead.

This weirdly ingrained habit of dismissing one of France’s finest clubs – prevalent within English-speaking media, above and below the line – is essentially nourished by an ignorance of how European football played out in the 1990s.

After all, you could only come to the conclusion that PSG are a 'plastic club' either if you weren’t around in the 1990s, haven’t bothered reading up on it since and yet still feel qualified to give an opinion – or if you were around and didn't pay attention.

Anybody falling into either of the above categories might be surprised to learn that during the 1990s, PSG reached five consecutive European semi-finals – yes, five – winning one piece of silverware and reaching another final.

Their sole triumph came against Rapid Vienna in the 1996 European Cup Winners’ Cup. The following year they lost to Barcelona in the final.

In 1993 and 1994, they reached the UEFA Cup and Cup Winners’ Cup semi-finals respectively. Then, in 1995, they did something that all subsequent PSG sides have failed to achieve: made the last four of the Champions League.

There were a host of memorable performances along the way. Victories over Real Madrid (1993 and 1994), Barcelona (1995) and Parma (1996) are still rightly lauded across France as examples of how to get your business done in Europe.

What makes PSG’s consistent excellence during that gilt-edged era particularly praiseworthy is that they were the opposite of what they’re often accused of being these days – habitual punchers above, rather than below, their financial weight.

They were wealthy by Division 1 (as Ligue 1 was known then) standards but unable to compete for the world’s finest players with Serie A clubs or Spain’s top outfits – not that you’d have ever known it judging by their results.

Working the French and Brazilian transfer markets more smartly than their rivals, they built a succession of top-class sides without breaking the bank, relative to many of the clubs they outperformed.

France internationals Bernard Lama, Paul Le Guen and David Ginola were among the players who rubbed shoulders with Seleção stars Ricardo Gomes, Valdo and Rai. George Weah sprinkled his particular brand of magic in the year that he went on to win the Ballon d’Or.

In many ways, Paris were a model club during the final years before the Bosman ruling, when clever planning and management could take a team all the way to the top.

So next time someone trots out the same old tired lines about PSG being no more than a blot on the European landscape, politely remind them football existed before 2011.

EXCLUSIVE Virgil van Dijk: “I’m not going to lie, I was pretty scared – I could have died”