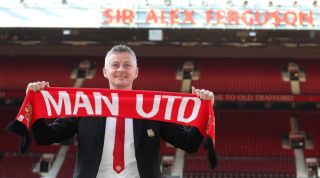 Nobody really spoke about the ‘United Way’ when Sir Alex Ferguson, Premier League winners’ medal hanging around his neck, bid farewell to the club he’d shaped for the best part of three decades in his own image.

The legendary Scot did reflect on the fabled ways of Manchester United in his speech to the Old Trafford faithful, but it had nothing to do with the style of the team on the pitch.

Ferguson instead spoke about the need to “stand by our new manager” – words that would do little to prevent David Moyes from lasting nine months as his predecessor, but reflected the way he was given time to prove himself upon initially arriving at Old Trafford. Manchester United are not a sacking club, or so it used to be argued.

Words about style of footballing identity were left out. Those have come in the years that have followed Ferguson’s retirement:, not from the man himself, but from others who seemingly wish to reinterpret the glory days. Never before has the so-called ‘United Way’ been spoken about as much as it has been over the past year or so, to the point where myth is warping reality.

It’s certainly true that at their best, at their most definable as a team, Manchester United under Ferguson were an entertaining outfit to watch. They provided some of the most dramatic moments in English and European football history, from their stoppage-time turnaround at the Camp Nou in 1999 to Michael Owen’s Manchester derby winner over a decade later.

But while United might have placed an emphasis on attacking football, it was a loose one.

Ferguson was never a philosopher like Johan Cruyff or Pep Guardiola. In fact, there were times when he was a pragmatist, like when he acknowledged the need to hire Carlos Queiroz to help with defensive organisation in Europe.

Manchester United, particularly towards the back end of Ferguson’s tenure, were even boring at times. If they had an identity, if they had a philosophy, as has become a requirement for any zeitgeist-setting team of the modern age, it was winning. That’s what defined the United that became English football’s predominant force.

All of this has been embellished of late. Perhaps it’s a reflex reaction to the dross served up by Jose Mourinho, and Louis van Gaal and Moyes before him. So turgid have the performances been over the past few years that it’s only natural the Old Trafford support has cast its collective mind back to better times.

If the ‘United Way’ is being used as a guiding light to illuminate the way forward, however, it’s important that some misconceptions are straightened out. Ole Gunnar Solskjaer, it has been widely circulated, plans on restoring the ways of old – but does the Norwegian truly have a grasp of what those ways are?

Many seem to think Solskjaer’s deployment of players like Jesse Lingard, Anthony Martial, Paul Pogba and Marcus Rashford as a counter-attacking unit constitutes the ‘United Way.’ That this was the way Ferguson favoured, sitting deep before hitting out with pace and conviction.

There were certainly a few of these moments – see Cristiano Ronaldo’s goal at the Emirates Stadium in 2009, or Wayne Rooney’s strike on the break at the same stadium a year later.

But United generally dominated games with the ball at their feet. They smothered opponents with possession, not quite in the way that Guardiola’s great Barcelona team used to, but one where they took complete control of contests. Suggestions that Ferguson’s teams based their entire strategy around fast breaks are yet another sign of the fabled ‘United Way’ contortion.

Some may argue, with some justification, that it instead has its roots in the era of Sir Matt Busby, the man who – according to folklore – introduced passing football to the English game. But are Manchester United fans and pundits really drawing on what they believed to be true about the ‘United Way’ from the 1950s and ‘60s?

At best, those who speak of the fabled ‘United Way’ are nostalgia merchants who see the club’s former successes through rose-tinted spectacles. At worst, they are revisionists shaping the past to suit their argument in the present.

Either way, Solskjaer and Manchester United as a whole must not allow their plotting for the future to be dictated by a set of principles and values that have been exaggerated and warped over time.

A FAN SPEAKS "There’s no question about which of Manchester United’s two rivals fans are hoping lose out this season..."

ANALYSIS What exactly is Ole Gunnar Solskjaer getting right at Manchester United?