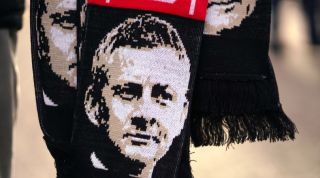 "These are the times Man United players step up, when the going gets tough. You sign up to rise to those challenges when you're at Man United. When you play for Man United you can't just be: 'Well, I'm talented. I'll just do my magic when I get the ball.’ If you want to be a part of Man United, it’s a survival of the fittest, isn't it? This club, this is what we do. That’s Man United."

That is not simply a repetitive monologue. Rather, it's a kind of Ole Gunnar Solskjaer megamix, an assortment of his quotes from the last three months spliced together. Perhaps his remarks could be dismissed simply as a turn of phrase, a linguistic tick in his second tongue. It can feel obvious that a Manchester United manager refers to Manchester United a lot; better that way, surely, than one who devotes too much of his time to talking about opponents.

Yet with Solskjaer, it seems to reflect something deeper: a belief in all things United and in United’s exceptionalism. He explains everything by its Unitedness. Attacking football, never-say-die spirit, comebacks, trusting youngsters, winning: that’s what Man United do. They are different, special, better.

He seems convinced of United’s innate superiority: crucially and endearingly, rather than arrogantly. It is not a divisive brand of tribalism. Instead, it feels a natural consequence of his earlier spell at Old Trafford: a 15-season stint as first player and then coach when United won nine Premier Leagues and two Champions Leagues. If they weren't writing their own folklore, Solskjaer was doing it for them.

The baby-faced assassin has returned to what had been a downbeat, demoralised club with boyish enthusiasm. He sees something magical and mystical where Jose Mourinho looked miserable about mediocrity. Solskjaer has been his antithesis: where he enthuses about United, Mourinho was at his most effusive in praise of Mourinho.

The Manchester United Solskjaer defines so often had only been glimpsed intermittently in the previous five-and-a-half years, amid plodding and prosaic football, myriad ignominies and the sense they were being left behind. Mourinho often appeared to be comparing United unflatteringly with their rivals or his former employers; Solskjaer feels they are incomparable.

If he was a wonderful front man for Sir Alex Ferguson, he is serving a similar function for the club. Part of their appeal lies in their image. Solskjaer has helped restore it with his belief in the romanticism of the club; in that respect, he should be Ed Woodward’s dream appointment, a man whose every utterance must delight the commercial department.

Others have analysed at United in recent years and commented on an increasingly tatty ground, a club apparently more fixated on money than glory and on fame than strategy, a star-fixated transfer policy, frequent underachievement, underwhelming football and a place where too few realised their potential and too many disappointed. Solskjaer still saw something special.

He may have been prompted by nostalgia, a throwback to a time of pre-eminence, rather than a club who were a combined 116 points off the Premier League pace in the time between Ferguson’s retirement and his return. That was more execrable than exceptional. If some of a club’s character can remain, the Norwegian has helped reconnect with an identity that felt lost. Some of the unwelcome changes in the post-Ferguson United have been concealed in the process.

The feeling is that rhetoric has helped produce results, and not merely Solskjaer’s more upbeat brand of man-man-management. His cherishing and mentioning of United feels infectious. “We are Man United,” said Paul Pogba after beating Chelsea. The players now talk about United more. It feels an astute motivational ploy, rebranding a joyless institution as a wondrous place.

It also raises the question if the notion of United’s exceptionalism can itself be a way of sustaining success. Ferguson established an aura that intimidated some opponents; Manchester United was not just a club, but a prophecy. Some of the famous comebacks felt inevitable to everyone, the victims included. The manner of the victories, like Solskjaer’s triumph in Paris, only added to the myth.

Bringing back a 'way'

LIST 7 caretaker bosses who filled in and did the business

It was impossible for him to have, develop or claim such an identity at Cardiff; indeed, despite the individual elements that distinguish and describe many a club, it is impossible to have this brand of all-encompassing exceptionalism at anything other than an elite outfit. Solskjaer’s history may have made it possible at United.

“He wanted to bring back the United way,” Jesse Lingard said in January. It felt an unwitting echo of a phrase almost copyrighted by United’s fiercest rivals and, in particular, one of their favourite former players-turned-managers.

Kenny Dalglish’s increasingly troubled second spell at Anfield was notable for his mentions of “the Liverpool way”, a seemingly elastic concept he used to excuse everything and explain nothing. It was a reminder that it's easier to reference the past than recreate it which, in time, will be Solskjaer’s test.

Yet as he surfs a wave of momentum, it feels in part because of a vision of United as something unique, which in turn has helped produce an outstanding turnaround.

NOW READ… What exactly is Ole Gunnar Solksjaer getting right at Manchester United?