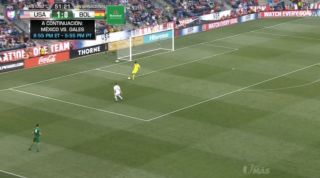 USA, who are managed by caretaker Dave Sarachan while the search for Bruce Arena's successor continues, fielded an experimental team against Bolivia in Philadelphia on Monday.

Sarachan's gutsy line-up selection paid off as the hosts stormed to a 3-0 victory. Walker Zimmerman (37'), Josh Sargent (52') and George Weah's son, Timothy (59'), all scored on the night.

Sargent's goal on his senior debut was the pick of the bunch, but for all the wrong reasons where Bolivia's substitute goalkeeper was concerned.

As Carlos Lampe tried to dink the ball to right-back Luis Haquin, Sargent – who plays his club football for Werder Bremen, having signed for the Bundesliga club in February – plucked the ball from mid-air before turning and applying a simple finish past the hapless shot-stopper.

The evening was an encouraging one for Sarachan, as the USA's up-and-coming youth players flourished ahead of friendlies against the Republic of Ireland and France.