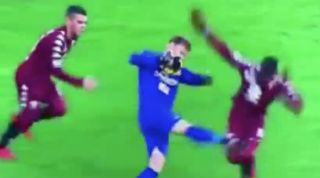 Walter Mazzarri's Torino beat 10-man Benevento 3-0 on Sunday, condemning the visitors to their 19th loss of the season after 22 games played.

Torino scored three first-half goals as they cruised to victory and their job was made far easier when Benevento's goalkeeper Belec was sent off under bizarre circumstances.

Just 30 minutes after Benevento went a goal down through Iago Falque's strike, the Slovenian keeper lost the plot as he angrily karate kicked Niang to try and move the Senegalese forward out of the way.

Maybe Belec just wanted a break, which means Benevento's other goalkeeper Alberto Brignoli could step in and attempt to score another cracker or two.