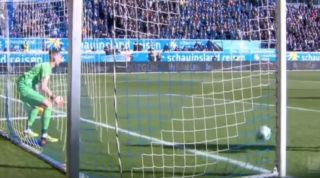 Ingolstadt's Stefan Kutschke cancelled out Ahmet Engin's opener in the 16th minute of his side's 2.Bundesliga clash with Duisburg on Saturday – but he was handed a dose of good fortune in the process.

Duisburg's No.1 Mark Flekken didn't seem to know where he was when Ingolstadt mounted an attack from deep, somehow failing to realise that the ball was in play when he turned back into his goalmouth to retrieve a water bottle.

His desperate centre-back tried to nod the ball out of goalscorer Kutschke's path and back to his net-minder – clearly in hope more than expectation – but was powerless to stop the Ingolstadt hitman from tapping into an empty net. Flekken, two yards behind his line, watched on in horror.

Understandably, the Dutchman's static reaction to the goal has drawn comparisons to a FIFA glitch.

Fortunately for Flekken, though, his team-mates bailed him out: Duisburg went on to win 2-1, with Borys Tashchi scoring the decisive penalty.