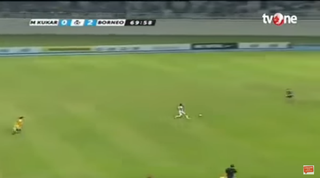 With Pasamania Borneo two goals up against Mitra Kukar in their Indonesian Liga 1 match, winger Puhiri showcased his outstanding acceleration to latch onto a deflected shot deep inside his own half.

Chasing the ball down, the player made up some 20 yards on his opposing defender before poking the ball past him and haring through one-on-one with the keeper.

Puhiri showed off sub-zero composure by taking the ball around him and finishing coolly.

(Quite why every video of this goal is sped up, we're not sure – it's not like Puhiri needs the help. But even with that caveat, enjoy.)