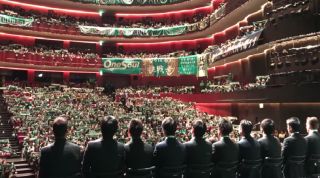 Matsumoto Yagama were showing off their new transfers ahead of the 2018 J2 League season which begins on February 25 – and boy did they do it in style.

Unlike a stadium unveiling or routine press conference, Yagama's new players were treated to a sold-out theatre welcome where the club's fans waved scarves and started a tubthumping chant to the rhythm of Grupo Galé's Beso a Beso.