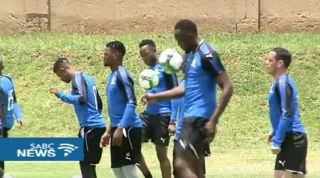 The eight-time Olympic gold medallist retired from athletics in August last year to pursue a career in professional football aged 31.

In order to prepare for his potential make-or-break trial with Bundesliga giants Borussia Dortmund, the Jamaican sprinter trained with the Sundowns on Monday.

Bolt has made it very clear in the past he would like to play for Manchester United one day.

He admitted to media after Sundowns training that he's not currently in great shape, but vows to be fit ahead of his big test in Germany.

"I don't know how quick I am with the ball but if I kick it around I can get there," he said.

"It was a fun day. Everybody was very welcoming so I really enjoyed it. I just told the coach that when I go back to Jamaica I need some training because I'm very, very unfit."