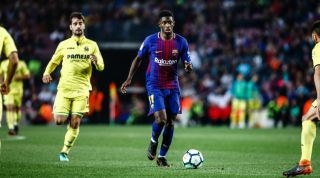 Barcelona thrashed Villarreal 5-1 at the Camp Nou, which means the champions are now just two games from finishing the La Liga season unbeaten - a domestic feat which has never achieved since the league became 20 clubs.

Dembele replaced Luis Suarez in the starting lineup, and the 20-year-old put in a stunning performance to delight the home faithful.

In the 93rd minute, the Frenchman scored the goal of the match as he dribbled from behind the halfway line and burst past three players before dinking the ball over goalkeeper Sergio Asenjo.

Dembele now has four goals for the season and manager Ernesto Valverde said his young forward has "that spark" to be a star at Barcelona.

"Dembele is a player with a lot of talent: great technique, can use both feet, he's quick, he's got that spark, he unbalances defences," the Barça boss said post-match.

"We think he can help us. He's very young and he has a lot of time ahead of him still. All players need time to adapt; when you're young there are things you need to learn, but the second goal he scored today was incredible."