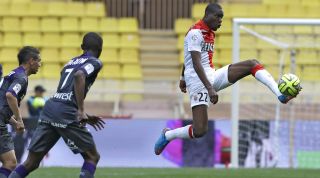 In 2013, Paul Pogba was the player making all the headlines as France lifted the Under-20 World Cup trophy in Turkey. The Juventus man was heralded as the best player in the tournament, but he wasn’t the only impressive performer in Les Espoirs’ powerful and commanding midfield.

To his left was the then Sevilla midfielder Geoffrey Kondogbia, and besides Pogba’s deft touches and long strides, his midfield partner brought drive, power, energy and an unmatched work-rate to France’s displays.

On the back of his successful summer, AS Monaco activated his €20 million release clause, bringing the 20-year-old back to Ligue 1 as part of the Monegasque side’s new generation. The signings of Radamel Falcao, James Rodriguez and Joao Moutinho made the headlines, but in Kondogbia, they had signed a player they hoped they could build their team around.

However, as Monaco’s project has adapted to a new financial model, the midfielder looks set to be one of the players sold on to keep the project ticking over.

"All the others could leave for financial reasons. When a player leaves, we will buy another, which is why scouting is fundamental in our strategy."

Serie A side AC Milan have been heavily linked with making Kondogbia one of their big-money signings this summer, but their interest will certainly alert the more financially powerful teams who have already been linked with him – the likes of Arsenal, Liverpool and Manchester United.

After moving back to Ligue 1, Kondogbia struggled to find his feet in his new surroundings. Although he played 26 games, his performances failed to live up to the billing. Claudio Ranieri’s midfield was built around Mounir Obaddi, Jeremy Toulalan and Joao Moutinho, with the young Frenchman having to make do with regular appearances off the bench.

As the season progressed, so did the former Lens midfielder – starting nine of Monaco’s last 11 games as the club from the principality finished second in their first season back in the top flight.

This season, under Jardim, Kondogbia has become a crucial part of the Monaco midfield trio. He is often described as a defensive midfielder, but there is so much more to him than the ability to read the game. Monaco transformed themselves into a team that was hard to break down, but deadly on the counter-attack; Kondogbia’s physical presence, as well as his athleticism, became a huge part of that success.

His displays in Ligue 1 and the Champions League won him a place back in Didier Deschamps’ France squad, and the part he played in Monaco’s run to the Champions League last eight hasn’t gone unnoticed by Europe’s big guns. Monaco will hate to let him go, but there is little doubt he's ready for the next step.

Similar in style to international team-mate Pogba, Kondogbia is a very dynamic midfielder; although he starts deep, he is very forward-thinking. He is full of energy and brings together some of the elements that have made Pogba and Paris Saint-Germain’s Blaise Matuidi so successful for club and country.

What Kondogbia does best is use his intelligence to read the game, and then his impressive physical attributes to track back, win the ball, and then quickly transition the play into a Monaco attack. He will often keep his passes simple, rarely wasting the ball – he knows where his strengths lie.

In the Champions League, especially against Juventus in Turin, he showed that he doesn’t panic under pressure. On a few occasions, he combines his quick feet with power and pace to charge out of positions of danger, turning them into counter-attack opportunities.

On a good day, the 22-year-old has everything a top midfielder needs in his locker, but at times he can go missing from games. Sometimes the event can pass him by, unable to get hold of the ball in areas where he could make a difference. As he has grown and developed since his time at Lens, this is becoming less apparent, and is hopefully just a sign of a young player continuing to grow.

The biggest concern for any potential suitor is his inability to turn his powerful runs into goals. He’s not a defensive midfielder in the Claude Makelele role, he is perhaps more like Patrick Vieira – but during his two seasons with Monaco he has only scored twice and added three assists.

When he does burst forward and gets into dangerous areas, Kondogbia needs to improve his decision-making and perhaps the belief in himself that he can be clinical in front of goal.

“There is also Geoffrey Kondogbia, who is an interesting player. A promising, left-footed midfielder,” said Arsenal boss Arsene Wenger speaking about the Monaco side during last summer’s Emirates Cup. “At the international level, he is only just behind Paul Pogba in the France team.”

If Kondogbia had caught the attention of the Gunners' gaffer then, certainly Wenger’s interest would have grown when the 22-year-old helped knock his side out of the Champions League.

When Kondogbia made his Ligue 1 debut in a 4-0 defeat to AS Nancy, he was in the same team as Real Madrid and France starlet Raphael Varane. Serge Aurier was also in the starting XI, showing the level of talent developed at RC Lens' academy.

It seems that a summer transfer is almost inevitable; it’s up to Kondogbia to make the right decision and pick a club that can help take his game to another level. So far in his career he has been brave but also very smart.

He has all the attributes and physical aspects of the game that would make him an ideal addition to any top Premier League club. Choose wisely and he could push himself into Deschamps’ starting XI for Euro 2016; three years on, France could once again combine Pogba and Kondogbia into a tournament-winning midfield. The Juventus man could also move for a huge fee this summer, but in Kondogbia clubs could collect someone who is perhaps just as talented, with as much potential, for a fraction of the cost.

Get the inside track on football's hottest properties