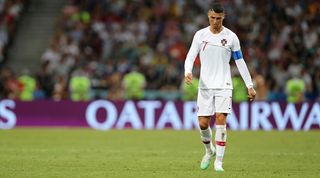 There was something apt about both Lionel Messi and Cristiano Ronaldo being knocked out of the World Cup within hours of each other last Saturday, and not just because it spared us the unbearable tedium of a quarter-final showdown between the two. To have one game so intractably dominated by two gilded individuals would have jarred a little with the spirit of this World Cup. As it was, their exits seemed fitting.

On Sunday, the headlines were all about Kylian Mbappe, who had torn Argentina to shreds, and how his blossoming on the world stage represented a symbolic changing of the guard. In a way, that was true enough – Mbappe’s performance was seriously riveting stuff, and the timing of his arrival at the elite level is too good to miss. But in another way, it obscured a greater point.

The emerging picture at this World Cup is that of an old-fashioned notion coming back into fashion: that a well-functioning team can always have the edge over one carried by an uber-talented megastar.

Football’s reverence for the superstar is nothing new, and the sport’s adherence to the ‘great man’ model of history – the urge to put a single person at the heart of events – is clear everywhere you look: Bobby Moore won England the World Cup in 1966, Diego Maradona did the same for Argentina 20 years later. Now it’s Gareth Southgate reshaping the new generation.

Even the stories that are expressly about collectivism are understood through the prism of individuals: Jurgen Klopp has rebuilt Liverpool, Johan Cruyff created total football. There’s nothing wrong or odd about this – it’s simple human nature. We make sense of the world through stories, and a story isn’t a story without a protagonist.

However, the notion has reached extremes in recent years, largely because the ludicrous talents of Messi and Ronaldo have demanded it. For nigh-on a decade, we’ve had two all-time greats – if not the two all-time greats – pitted head-to-head within club football’s most high-profile rivalry. Every meeting between Real Madrid and Barcelona has been billed as a personal duel, and were Portugal and Argentina to have met this summer, the same old story would have been cranked up to 11.

And indeed in their own way, Argentina and Portugal are inescapably the teams of their respective star: the former a laughably inept bunch who rely on their impish genius to bail them out; the latter a well-drilled but limited unit whose success hinges wholly on Ronaldo’s goals.

Instead, we will get the opposite. France against Uruguay: one side full of stars that is finally (and tantalisingly) hinting at becoming the sum of its parts, against a humble collective whose every member is psychotically committed to doing right for the team.

In fact, Uruguay, despite being spearheaded by a pair of bona fide superstars in Luis Suarez and Edinson Cavani, are perhaps the purest collective at this tournament. They both defend and attack as a unit, and no player is given the luxury of avoiding the dirty work. Suarez and Cavani, far from acting the brats, positively lap it up.

But it wasn’t just Saturday’s pair of last-16 games that quashed the eminence of the individual. Look closely, and all across the World Cup, the idea of the prevailing superstar has been quietly ushered into a back room and told to stay there for the summer. Those teams explicitly geared up to exploit the talents of a standout player – Robert Lewandowski’s Poland, Mohamed Salah’s Egypt, Christian Eriksen’s Denmark, Son Heung-min’s South Korea, as well as Argentina and Portugal – have punched merely at their weight or well below.

Meanwhile, Russia’s gritty collectivism has been the story of the tournament so far. Japan took Belgium to the wire via the same means. Sweden have discovered that the long-feared loss of their treasured alpha-dog Zlatan Ibrahimovic has not been a curse, but a blessing. Croatia’s alliance of silky technicians and a languidly harmonious playing style could well see them to the final.

Then there’s England, whose remarkable blossoming has come as self-regarding luminaries of the ‘golden generation’ have made way for a squad of young, unassuming and altogether less famous footballers who seem to possess an authentic sense of camaraderie – something alien to sides of the recent past.

On the flip side is Germany, whose shock early exit has in some quarters been put down to a creeping narcissism, having corroded the ethic of selflessness that made them world champions. The journalist Raphael Honigstein wrote of “a squad that come across as brand ambassadors, more interested in amassing social media followers than connecting with their public”.

There are counterpoints. Spain’s imperious success has been founded on the squad’s star power remaining strictly secondary to the team’s post-Cruyffian, collectivist playing style. That did not change this summer. Yet they were dumped out ignominiously after four games. Meanwhile Neymar, without a doubt world football’s most tiresome egocentric – a title for which he has fought off formidable competition – has, beneath all the tedious theatrics, actually been pretty good.

Brazil’s No.10 has certainly been key to both his side’s wins, and there’s little doubt that the team is elevated by his presence. Again, though, Neymar's best displays so far have come when he has stopped insisting on doing it all alone – and Brazil’s best player has not been the soloist up front but the orchestrator in the middle, Philippe Coutinho.

Ranked! The 10 best goals of the World Cup (so far)

Brazil versus Neymar: how a superstar lost the love of his country

In this respect, a Brazil-Uruguay quarter-final would be fascinating: a setup that steadfastly refuses to indulge its egos against one that very much does. The evidence so far is that a good team will beat a great individual.

Which isn’t strictly true, of course. Anyone who has followed the careers of Steven Gerrard, Matt Le Tissier, Juninho, Gareth Bale – or, of course, the international travails of Messi and Ronaldo – can attest to how the bleak mediocrity of 10 players can be offset by the magic of one. The beauty of football is that it leaves room for both. The recent history of the Madrid-Barcelona rivalry, for instance, could be (simplistically) read as a battle between star power and collectivism. Two decades on, it has thrown up no clear winner.

Football will always have its megastars. This is especially true in today’s era of Instagram; of celebrity worship; of insatiable one-man brands. But this tournament has at least provided a bit of an antidote to all that, a welcome reminder that individual brilliance isn’t the only sort of brilliance out there.

Although, that said, a World Cup without a defining superstar does raise one major question: who the hell are Real Madrid going to blow their money on this summer?