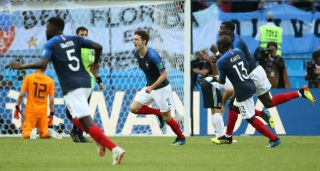 England were home and hosed in the group after just two games, and their victories over Tunisia and Panama were largely based on creative set-piece thinking and efficient execution. One of the exceptions, of course, was Lingard’s fabulous effort against Panama. Yes, yes, it was Panama - but it still counts.

It was a seductive piece of football. Within the context of recent performances, it was also staggeringly un-English. The combination with Raheem Sterling which opened the shooting angle was slick and fluid, free of any sort of inhibition, and Lingard’s artful finish was loaded with the sort of technical excellence which has been a rare sight within recent generations.

It was the standard Coutinho sequence: receive the ball in the pocket of space in front of the box, step infield and onto his right foot, then bend the ball across the goalkeeper and into the top corner.

It’s not unusual to see him do that, but this was still a special goal.

GOAL! What a strike from Coutinho as his shot flies past Sommer to give Brazil the lead! June 17, 2018

The hat-trick goal, of course. The free-kick which everyone in the stadium and even those watching on television just knew was heading nowhere other than the back of the net.

It was all about theatre. In Ronaldo’s private collection of free-kicks, this probably wouldn’t even make the top five. Nevertheless, the timing gives it a worthy place on this list. The game itself was a classic, back-and-forth between two flawed sides that were heading for early elimination, but it was one of those nights which showed Ronaldo for the force that he still is. Even at 33, he can still open the throttle and push the pedal to the floor; this free-kick, with its perfect arc, was the exclamation point on a thrillingly powerful performance.

Yes, Germany were ultimately doomed, but consider the circumstances here: it’s the last kick of the game and everything about this free-kick routine needs to be perfect - the nudge, the set by Marco Reus, and then the finish (which had to be lethally precise). Up stepped Kroos, into that tiny corner of the net it went.

It was quite beautiful and there’s a reason why the slow-motion replay is still on heavy rotation across social media.

More than anything else though, this was the hallmark of a world-class player. The Americans have a word - clutch - which describes it. It’s the art of coming up big for your team at a critical moment and, although it ultimately didn’t save Germany from elimination, that’s exactly what Kroos delivered.

GOAALLL!!!! A late, late winner for Germany as Toni Kroos bends in a brilliant free-kick!June 23, 2018

Modric has this in his locker. Most will remember a strikingly similar goal he scored against Manchester United in the Champions League a few years ago.

The strike is very pure. Willy Caballero may have suffered a catastrophic tournament, but he had no hope against the pace and power that Modric was able to generate. Still, it was the way he managed to manufacture space which really caught the eye. Nicolas Otamendi was shimmied one way and then the other, before Modric released his shot with almost no backlift. From the moment he cuts back to his right side, there's nothing any Argentine player can do to stop this.

Pedants will say that it’s the kind of goal he should score more often. To be contrary, though, it's the rarity of these moments which makes them more special. Modric is so slight and his game is so dependent on finesse that he doesn’t seem capable of such violence. When he produces it, it's spectacular.

When this free-kick was given, anyone familiar with Kolarov’s back catalogue would have thought the same thing: the distance and angle was perfect for him.

Even by his standards, though, this was a beautiful free-kick. Costa Rica may not have been up to much this time around, but it was still Keylor Navas who he beat from nearly 35 yards - and with precision rather than pace. The other flattering detail is that this could only have been scored in one way and in one part of the goal. The position of the free-kick took away Kolarov's option to shoot across Navas, meaning that the goalkeeper would have known exactly where the ball was headed.

… and it still beat him.

GOAL! What a free-kick from Kolarov. The Serbian captain from 25-yards out finds the postage stamp with his trusty left-boot June 17, 2018

Cavani’s second goal in this game wasn’t too shabby – it was another fabulous finish – but it was his first which will live longest in the memory.

Before this game, the expectation was for a 120-minute stalemate full of niggle and cards, and short of expression and goals. What we got, within minutes of kick-off, was one of the world's great forward combinations showing all its rainbow of precision and excellence.

Cavani finds Suarez, Suarez finds Cavani. Those two have a long history together, and there was certainly a hint of telepathy to the combination. Both demonstrated the range of their vision, but the finish is extraordinary too. Even now, days afterwards, it seems impossible for Cavani to have generated the power that he did.

GOAL! Sensational one-two. Cavani swings a crossfield ball out to Suarez on the left who returns the favour with a whipped delivery to the back post for Cavani, to power in a header June 30, 2018

The build-up was fortunate; Theo Hernandez’s errant cross should never have made it through the penalty box. Nevertheless, Pavard’s finish belied the skill set of a full-back with just two professional goals to his name.

The difficulty level is off the scale: approaching a moving, bouncing ball, twisting your body into the right position to shoot, and then trying to keep the ball down.

The other aspect, of course, was that this was a goal which France really needed. Argentina would fall apart in that game, surrendering hopelessly to Paul Pogba’s vision and Kylian Mbappe’s pace, but without Pavard’s intervention maybe that wouldn’t have been the case.

Let’s be honest: this is just what Quaresma does. He’s a maddening footballer who must be almost uncoachable, but he owns the trivela like nobody else. This goal was essentially a repeat of one he scored against Fenerbahce for Besiktas, and another he bent in against Rio Ave during his time at Porto, but the technique is so remarkable that the novelty remains.

The neutrals were behind Iran in this game – they were a great story – and so it felt like a punch to the gut at the time. Nevertheless, Quaresma at his best is a great spectacle and this was one of the great World Cup goals of the modern era.

QUIZ Can you name all 28 England players to take a shootout penalty in a major tournament?

At this point, all looked good for Spain. Having clawed back level and overcome David de Gea’s dreadful goalkeeping error, this put them into the lead for the first time on the night. Of course, it wasn’t a lead they held and Ronaldo’s late equaliser punctured any momentum, but Nacho still produced his country’s standout moment of excellence.

Do yourself a favour: only watch this from behind the goal. That’s really the only angle which does the contact proper justice and shows how exquisite Nacho’s technique was.

It’s crisp, it’s pure – it’s as close to perfection as a half-volley gets.