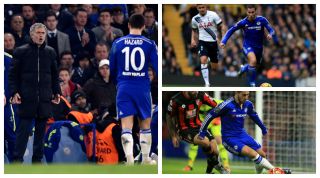 Since May 3, Neymar has scored 22 goals at club level, Thomas Muller 21 and Alexis Sanchez 12. Kevin De Bruyne has found the back of the net 11 times in the same period, Angel Di Maria seven and Marco Reus nine. In those seven-and-a-bit months, Eden Hazard hasn't put the ball past a goalkeeper while wearing a Chelsea shirt.

If it seems unfair to compare the Belgian to the illustrious forwards above, it’s important to remember that it wasn't long ago that Hazard’s manager was calling him the third-greatest player in the world behind Lionel Messi and Cristiano Ronaldo. “Eden is the best player in England,” Jose Mourinho said in July. “The Premier League is the top competition in the world [so] he is among the top players.

“He is coming with big status now and was voted one of the top 10 players in Europe last year. In my opinion he should be in the top three, not in the top 10.”

Goals, of course, are not the only measure of a player’s ability, and Hazard’s barren run does not negate all that the Portuguese said in the summer.

Chelsea’s general malaise, moreover, has clearly had an effect: it could easily be argued that Hazard is simply performing at the same level as his team, who are only the 16th best in the Premier League according to the current standings. Indeed, the fact that he has scored four goals in four games for Belgium in 2015/16 suggests that the issue has as much to do with Chelsea as it does with Hazard.

He has also gradually been improving in recent weeks, and was one of the Blues’ key players in last Wednesday’s 2-0 Champions League win over Porto, which was probably their most impressive display of the campaign.

Nevertheless, 26 games and 2,218 minutes without a goal for his club is a protracted drought for a player of Hazard’s immense talent, particularly as the 24-year-old netted 19 times in all competitions last term.

The most obvious explanation for the dry spell is a lack of confidence. The extent of the champions’ slump has been astonishing, and it is only natural that poor results have led to greater criticism, which in turn has led to inhibition on the field.

It is notable, for example, that Willian – the only Chelsea player whose stock has risen this year – now takes almost all of the team’s set-pieces; the Brazilian has had great success with free-kicks in the last few months, but the usurpation of Hazard is still a clear sign of his diminished standing.

RECOMMENDED Willian: Chelsea's shining light in a season of darkness

While it’s therefore probable that a temporary dip in self-belief is a contributing factor, it is unclear whether Hazard has the ruthless streak and killer instinct to ever be a truly consistent scorer. Mourinho inferred as much last month when he was asked why he does not believe the former Lille man’s best position to be in a central role behind the striker.

“We have different concepts of No.10, me and him,” said the Portuguese. “For me, a No.10 does a lot of things, with the ball and without ball. So, for me a No.10 is a very special player in my team.

Hazard also addressed the issue himself in an interview with Belgium’s Sport/Foot Magazine in September.

“I ask myself what I can do to become like Messi and Ronaldo, and score 50 or 60 goals in a season,” he said. “I try but I realise that I will never be a true scorer. It is not in me. It is mainly mental. Sometimes I still think after a goal, 'That's enough'. I'm not in search of records like some other players. If I can score between 15 and 20 goals each season, I will be very happy.”

Football is a team game and it feels harsh to criticise Hazard for his appreciation of the collective, particularly as Mesut Ozil and Dimitri Payet are the only Premier League players to have played more key passes – defined by Opta as a pass leading to an unsuccessful shot – this season.

At the same time, though, a certain degree of decisiveness and even selfishness is required to become a semi-permanent fixture on the scoresheet. It is notable that Hazard has taken just 21 shots in 15 Premier League matches – fewer than Victor Wanyama, Etienne Capoue, Dan Gosling, Bakary Sako and Robbie Brady among plenty of others – and 11 in six Champions League appearances.

It isn't just the quantity of shots that has been low, but the quality too. One version of the Expected Goals model – a tool that measures how many goals the average player would have scored based on the location and quality of the attempts in question, created by the analytics writer Michael Caley, calculates that Hazard’s cumulative expected goals in the Premier League this season is just 1.5. It’s not that his finishing has been particularly poor, it’s that he’s simply failing to get into strong scoring positions.

An example of this can be found in the 3-1 loss to Southampton, when Hazard took just a single shot from 30 yards in 90 minutes on the pitch.

In the 1-0 victory over Norwich, he also had just one effort at goal from a tight angle from outside the box, despite Chelsea enjoying 64% of possession.

It was a similar story in August’s home defeat to Crystal Palace, when Hazard again managed just one attempt, which failed to trouble Alex McCarthy in the visitors’ goal.

The above graphics don't absolve Hazard’s team-mates of blame – perhaps he isn't getting into good scoring positions because of issues of supply and service – but they are a decent indicator of his problems when it comes to finding the back of the net.

Hazard frequently fashioned opportunities for himself with his magnificent dribbling last term; this time around, he has struggled to make the same impact in general play, and the goals have dried up as a result.

The 2014/15 PFA and FWA Player of the Year has been significantly below par so far this season. Twenty-six games without a goal is an extremely long run for a player as gifted as Hazard, who will be desperate to end his drought against Leicester City on Monday night.

RECOMMENDED Analysis: Amid the gloom, Chelsea are improving – and here's the proof