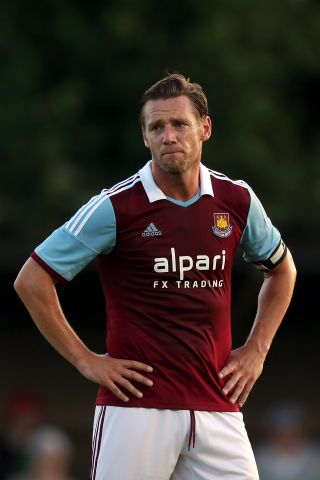 It's not just a return to St James’ Park for Hammers boss Sam Allardyce, who had an unhappy spell at the club in 2007/08. It's also a return for captain Kevin Nolan and centre-forward Andy Carroll, although the Gateshead-born No.9 is again out injured.

Nolan and Carroll briefly lived together in their Newcastle days, under the terms of a bail arrangement when Carroll was awaiting trial for an assault charge, and became firm friends. “He was a pretty good cook,” remembers Nolan, despite the fact Carroll’s headline dishes were “pasta with tomatoes, chicken, things like that.”

The duo also formed a good relationship on the pitch at Newcastle, and Allardyce fielded them together at West Ham to recreate the partnership. “Instead of a 4-3-3 we went to a 4-2-3-1, and played Kevin in the hole to get up and around Andy,” Allardyce recalls. “I said, ‘Andy’s here, what would you like to do?’ and Kevin said, ‘Play in the hole’”.

Although Carroll hasn’t formed a strong relationship with West Ham’s two wingers – Stewart Downing didn’t provide any assists for him in their season together at Liverpool, and Matt Jarvis didn’t provide any last season – his partnership with Nolan is extremely effective: Carroll wins the header, Nolan gets to the second ball.

But while Carroll is a good all-round centre-forward when fully fit, Nolan is a particularly strange player. Frankly, his skillset appears extremely limited – for an attacking midfielder, he offers extremely little in the way of technical ability, being neither a reliable passer nor a gifted creator. He is, almost exclusively, a goalscorer. Unusually for a midfielder, that might be his only major strength.

He’s a little similar to Tim Cahill during the Australian’s period at Everton – regularly contributing goals, but hampering his side’s overall build-up play. If Nolan was to suffer from a goal drought, it’s difficult to see what else he brings to West Ham.

Nolan’s performance on the opening weekend of this season, a 2-0 victory over Cardiff at Upton Park analysable here on the new desktop Stats Zone, demonstrated his style perfectly.

The most noticeable feature is how little he’s involved– he attempts only 15 passes throughout the 90 minutes. It’s also amazing how infrequently he completes a pass in the attacking third – for a player designed to play at the top of the midfield triangle, it’s a remarkably poor contribution.

But there are also a couple of positive features – almost all his defensive contributions (2 interceptions, 2 blocks, 2 tackles and 5 clearances) are successful, underlining the combative style that makes him perfect for an Allardyce side. And, of course, Nolan got his goal.

With Carroll out injured, Modibo Maiga played the centre-forward role, but Nolan combined with the Malian forward only twice throughout the contest – and neither occasion was in a particularly dangerous position. When Carroll returns, Nolan might find himself playing a more prominent role.

It would be unfair to highlight Nolan’s limitations purely from one match, but this sums up his style perfectly. Last season at West Ham, he finished as West Ham’s top goalscorer with 10 goals. That was a crucial contribution – Carroll managed only seven, while the third-top goalscorer was Mark Noble, whose goals all came from penalties or free-kicks. Nolan recorded 78 shots throughout the campaign, only one fewer than Carroll.

Again, however, his all-round play was extremely limited. He created only 28 chances in 35 games, contributing just two assists, and successfully dribbled past opponent only four times all season. He also had a surprisingly poor aerial record, winning only 31% of his duels.

Then again, maybe we shouldn’t be surprised at that record – when interviewed by FourFourTwo 11 years ago, Nolan was frank about his major weakness: “I can't head the ball,” he admitted – which makes it particularly surprising he started out as a centre-back.

Intriguingly, in that interview Nolan admits he wanted to be seen as “a good footballer who could score goals”, which fits perfectly with how many fans will view him.

He hasn’t become an international and hasn’t won a major trophy, but having reached double figures in the last four campaigns, Nolan can do one thing reliably: score goals.