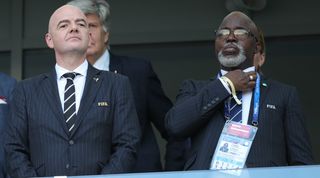 FIFA recognises Amaju Pinnick (pictured above) as leader of the Nigeria Football Federation (NFF). But Chris Giwa, who heads up a rival faction inside the NFF, has insisted since August 2014 that he won a vote to become top boss of the federation.

Giwa has already served a FIFA ban – and the federation threatened to ban Nigeria from international competition if he didn't step down – but is continuing his legal challenge against Pinnick to try to attain recognition as the federation leader. Pinnick's NFF tenure expires at the end of September.

The leadership crisis means the Nigerian Professional Football League - which was due to recommence on July 18 - has been suspended indefinitely by the League Management Company (LMC) until the dispute is resolved.

"The decision is based on the current adverse circumstances in the administration of football in the country, as a result of which sponsors, partners and service providers have expressed strong concerns and are reviewing their involvement in the league," the LMC said in a statement.

"Furthermore, organising matches of the NPFL under the current circumstances might cause irreversible damage to the league brand."

Play-off losers Bari have been relegated from Serie B... to Serie D