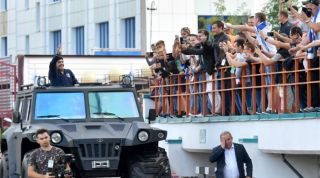 Maradona, who made headlines as he watched his beloved Argentina play at the World Cup, signed a three-year contract with Dynamo Brest in May - just one month after leaving his role as head coach of UAE side Al-Fujairah.

The 57-year-old will "deal with the strategic development" at the Belarusian Premier League outfit that finished sixth last season.

Brest, who have never won a league title, were very excited to roll out the red carpet for Maradona's arrival on Monday as he was paraded around in a giant Jeep fit for military service.

"I needed a challenge, an important project to show that I never stopped working.

"I take it with all the affection of the world, respecting the people who gave me this opportunity."