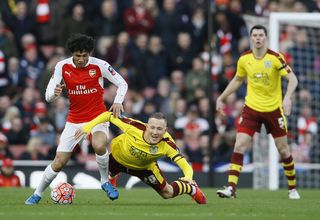 It's fair to say that the last frizzy-haired Egyptian called Mohamed to move from Swiss club Basel didn't exactly make a roaring success of his time in the Premier League.

Arsenal debutant Mohamed Elneny only has to last beyond 12 months to do better than his good friend Mohamed Salah did at London rivals Chelsea, where the initial hype converted to only six Premier League starts before he was shipped out on loan to Fiorentina and then Roma.

Elneny plays in a more central role and the early signs against Burnley were encouraging. OK, possibly the fan who suggested on Twitter midway through the first half that "Elneny is already better than Vieira" might have been getting a little over-excited. Already better than Mathieu Debuchy, maybe. Vieira, no.

Elneny will take time to reach his full potential and adapt to English football. At 23 years old he still looks raw and a little slight, and he was shrugged off the ball a couple of times early on, most notably by Andre Gray in a dangerous area on the halfway line. Bulking up may do him no harm in the hustle and bustle of the midfield.

But what he did have was a natural calmness. If there were nerves on his first appearance since moving from Basel, it didn't show. Elneny played alongside the returning Francis Coquelin in a deep-lying midfield role and showed a willingness to join the attack too, rather than merely sitting.

His first involvement was to chop down Burnley's Fredik Ulvestad in possibly over-eager fashion, although even that drew cheers from an encouraging crowd.

On the ball he largely kept it simple, but in an effective way. Elneny was constantly on the move to make himself available to receive a short pass, and was aware of where his team-mates were when he got it. More often than not he kept the ball moving in straight-forward fashion, picking out one of the four attacking players ahead of him and allowing them to go and create. Seldom did he give the ball away.

You could see his confidence grow too. He wasn't afraid to offer positional instructions to Alexis Sanchez and there was applause from the crowd as a smart through-ball just evaded Alex Oxlade-Chamberlain, but showed his ability to be incisive. He had a shot straight at Tom Heaton from 25 yards too, before testing the goalkeeper with a more rasping drive early in the second half.

By the hour mark Elneny was popping up several times in a move, Mesut Ozil-style, before turning up inside the box to curl an effort over the bar. He had his fourth shot of the game late on, volleying wide from the edge of the box. He berated himself for missing the target, but it was one of the few things he did wrong on the afternoon.

The Egyptian lasted the full 90 minutes and, although Arsene Wenger may yet decide to give him a little more time to adapt before throwing him into a Premier League starting line-up, Elneny certainly did his case no harm.

"I felt he started a bit cautiously, playing a bit secure, but he became more adventurous and had some good shots on goal," Wenger said afterwards. "His mobility and work rate was exceptional, he just needs to adjust to the power of the Premier League. This was a good welcome today. It will take him some time to adapt to the power side of the game here but the intelligence, ability and technical level is good."

Gabriel no match for Mertesacker in the air

Per Mertesacker's suspension meant that Gabriel returned to the Arsenal starting line-up against Burnley, but the Brazilian didn't do much to improve his chances of staying in the team.

Arsenal really missed Mertesacker's aerial dominance in the first half, when Burnley striker Sam Vokes won far too many headers - one of which ended up in the net.

Laurent Koscielny was not blameless in defence, as Gray outmuscled the Frenchman to race clear on goal on one occasion, but it was Gabriel who appeared most vulnerable.

The fact that he lost so many headers was less surprising given the fact that on some occasions he didn't even get off the ground against Vokes. Rule number one of winning the ball in the area: it's a good idea to jump.

Gabriel was lax in allowing Vokes to drift in behind him for the goal and still didn't sense the danger as the ball came into the box, allowing the forward a free header past David Ospina.

One thing's for sure, Calum Chambers really likes playing at home to Burnley. Two career goals, both at home to Sean Dyche's side. Chambers started at right-back when he scored in a 3-0 Premier League win over the Clarets last season and he was back in that position again this time, after starting in a sitting midfield role against Sunderland in the last round.

England boss Roy Hodgson was watching on from the stands at the Emirates and this performance was a reminder of why Chambers forced himself into the senior squad last season. The 21-year-old got forward well and even Alexis Sanchez would have been proud of  the superb finish Chambers produced for his goal, brilliantly directing the ball into the far corner from an angle with the outside of his boot. It was the best goal of his career. Well, it was better than the other one he scored, anyway.

"It was a great finish, he's quite a good finisher in training," Wenger said.

Arsene Wenger opted to hand Alexis Sanchez a start as the Chilean builds up match fitness following his return from a hamstring injury. Sanchez appeared as a substitute against Chelsea last week but now looks certain to return to the Premier League starting line-up against Southampton on Tuesday.

"He came through well and you could see physically he is ready," Wenger said. "I was not too worried about him on the fitness front because two weeks ago he was already there physically, we just had some worries about his muscle."

Sanchez started wide on the left and used the width of the pitch well in the first half, before cutting inside when in possession in trademark fashion. He provided the assist for Chambers' strike and was then the man in the right place at the right time to put Arsenal back in front after the interval.

Undoubtedly the 27-year-old will be key if Arsenal are to challenge for the title, and Wenger believes Sanchez is now refreshed and ready to reach top form once more.

"He's had a long rest now," the Gunners boss said. "When he got injured you could see signs of fatigue. Two months' rest is a good winter break."

Burnley could be back in top flight soon

Burnley boss Sean Dyche admitted he could never be happy after a defeat, but he was content with his side's performance at the Emirates. The Clarets played defensively and offered little in their 3-0 loss here last season, but gave the Gunners a closer run for their money on this occasion.

It's easy to see why strike duo Andre Gray and Sam Vokes have caused Championship defences a headache this season, with Gray's pace and power complementing Vokes' aerial prowess.

Burnley were typically well organised and resilient defensively too, conceding possession but restricting Arsenal to few genuine clear cut chances. They still have some work to do to catch Hull City and Middlesbrough in the automatic promotion race, but they did enough to suggest they could well be back at the Emirates in the league next season.

"They are a very efficient strong team with no weaknesses," Wenger said. "Everything they do is based on efficiency."

"We produced a performance that pushed Arsenal all the way," Dyche said. "Last season when we came here we tried to absorb and be tactically strong, but once they scored we never looked like getting back into it. This time we changed that. We caused plenty of trouble for them. Our gameplan was to be awkward and we were very awkward today."