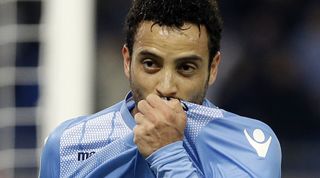 If incessant reports from Italy and England are to be believed, the Manchester United hierarchy are ready to make Lazio winger Felipe Anderson their showcase winter signing.

However, the eye-watering sum of money they’re apparently willing to shell out on the Brazilian – around £35 million – smacks of desperation and a scouting policy based on reputation rather than diligence.

There have certainly been moments to suggest that the 22-year-old is worth a large sum, but if Louis van Gaal & Co. are relying on him to be the instant answer to their problems this season, they may be disappointed.

Lazio’s transfer dealings are headed by president Claudio Lotito and sporting director Igli Tare, as frugal a duo as you’re likely to find in European football. Their aversion to splashing out on transfer fees has been one of the major reasons they have become so unpopular with fans over the years, but this stinginess was also the hallmark of one of their greatest triumphs.

In January 2014, Hernanes was sold to Inter for around £15 million. The fans protested at the sale of the popular playmaker nicknamed ‘The Prophet’, but the timing of his exit and the fee received have since been justified. The Brazilian was 28 at the time, and has rapidly declined firstly in an Inter shirt and then more recently with Juventus, where he moved in the summer.

This will likely give Lotito the confidence he can pull off a masterstroke of transfer market timing again. The president saw off United’s interest in Anderson and Stefan de Vrij in the summer as well as widespread pressing for skipper Lucas Biglia, but this time could be different.

The sum of £35 million that United are reportedly offering for Anderson would make him the joint-sixth-most expensive signing by a British club ever alongside Luis Suarez and Andy Carroll. On the all-time list he would be 28th ironically alongside Gaizka Mendieta, who flopped hugely after his move from Valencia to Lazio, lasting only one season before eventually ending up at Middlesbrough.

With Anderson’s form on the slide and a year having passed since he was at his best, this could be another economic win for the president, even if he would have a hard time explaining that to an already-irate fan base.

Perhaps worryingly for United supporters, the interest and excitement generated around Anderson has increased almost entirely from a four-month glut of good form last season, starting in December and ending in April. During that period, the Brazilian scored all 10 of his goals for the season and contributed seven of his eight assists in 13 appearances.

However, the other 19 performances that season (one goal, no assists) weren’t quite so sensational and his debut campaign in Rome the year before is best forgotten (13 apps, no goals).

Anderson’s maiden season revealed a difficulty with adapting to a new league and culture. The forward told FourFourTwo last year that he would eat spaghetti carbonara and drink fizzy drinks every day following his arrival, as he didn’t know how to order anything else.

“I had to go on a diet to lose the weight I gained,” he admitted. “I got sick and tired of spaghetti carbonara. Now I only have it… oh, once or twice a week,” chuckled the wideman

If last season suggested he had come to terms with Serie A, this campaign has again showed a worrying trait – the winger has suffered from the burden of hype and expectation with the No.10 shirt on his back.

Coaches are now more aware of his threat and how to nullify it, defenders have become wiser to his movement and technical ability, and fans have shown less patience for his frequent selfishness or wastefulness as their side have failed to reproduce the swashbuckling performances of last season.

The 22-year-old has scored four times this season but has frequently flattered to deceive and was recently benched by coach Stefano Pioli for three consecutive Serie A matches.

The statistics underline his decline from last season: Anderson’s shots per game have gone down from 2 to 1.5, his key passes from 1.1 to 0.7 and his dribbles from 3.3 to 2.3.

Tellingly, he is being fouled more, with two fouls against him per game a significant increase from last season’s 1.3 as defenders pay him closer attention.

However, quite how good he was this time last year should not be ignored. Like Neymar, his former partner in crime at Santos (“he talked to me about getting together again,” Anderson revealed), the Brazilian would win games almost single-handedly and was producing a brand of consistent individual brilliance that led beleaguered Sampdoria coach Sinisa Mihajlovic to compare him to Cristiano Ronaldo.

That Felipe Anderson would merit a transfer fee to put his name in the record books. However, the evidence suggests that the winger has only produced £35 million form for four of his 30 months in Rome. You need only look at Memphis Depay’s struggles so far this season to realise stepping up to the Premier League is as difficult as ever.

With United frequently linked to polished superstars like Gareth Bale, Cristiano Ronaldo and Neymar, there should not be expectations that Anderson will offer anything like the same level of performances.

Within Serie A the Brazilian has been outperformed by the likes of Napoli’s Lorenzo Insigne, Fiorentina’s Federico Bernardeschi and Inter’s Adem Ljajic this season. He isn’t on the Paul Pogba level of Serie A galacticos quite yet because of his unpredictable form, and big cheese Lotito could well be eyeing up another perfectly timed sale at the peak of Anderson’s value.

A continuation of this season’s indifferent form would soon prove that last year’s stunning performances were the exception rather than the norm. Anderson’s struggles to adapt and cope with pressure, plus his tendency to disappear in games, would make his signing a risky and long-term investment for United, rather than an immediate solution to their problems.

Not that the player himself wouldn’t be confident of stepping up. “The English game suits me: it’s very fast and I’m sure I would find it easy to adapt,” he told FFT. But will he be given that chance?