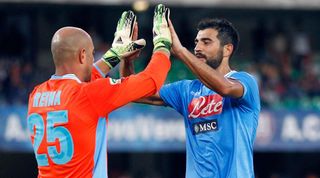 Napoli experienced a mini-revolution this summer after the appointment of Rafael Benitez as coach, after predecessor Walter Mazzarri joined Inter.

That coaching change has prompted a significant change in Napoli’s playing style – they’ve been accustomed to a three-man defence in recent years, but Benitez instantly installed his 4-2-3-1 system, the formation he favoured throughout much of his time at Valencia, Liverpool and Chelsea.

That has meant a change in the way Napoli operate, primarily at the back.

In midfield, the roles of Gokhan Inler and Valon Behrami in front of the defence are relatively unchanged, while Marek Hamsik remains in an advanced central attacking midfield role. The wide positions have been filled by newcomers Jose Callejon and Dries Mertens (or Lorenzo Insigne), while up front Gonzalo Higuain was signed to spearhead the system after Edinson Cavani’s departure.

To summarise: Napoli’s attacking players are new signings, the midfielders are playing the same role, but the defensive players have survived from Mazzarri’s reign and been forced to adapt.

The change has been particularly interesting for Napoli’s wing-backs. On the right, Christian Maggio was one of Mazzarri’s key players with his constant motoring up and down the touchlines, often arriving late at the back post to provide an aerial goal threat.

The 31-year-old has often struggled when asked to play as a full-back in a four-man defence at international level, however, and hasn’t appeared comfortable immediately this season.

Maggio is out of tonight’s clash against Arsenal because of knee surgery, so Giandomenico Mesto will play instead. He’s also suited to playing as a wing-back, but has been more impressive than Maggio so far this season, putting in a huge number of tackles.

On the opposite side, Benitez has a choice between two Colombians – Juan Zuniga and Pablo Armero. This selection has more tactical meaning, because the duo are different players: both are attack-minded, but Armero is a pure wing-back or even a left-sided midfielder, whereas Zuniga is more comfortable at full-back.

In an attacking sense they’re also different. Zuniga, unusually for a full-back, is a superb dribbler as demonstrated below.

Armero, however, is more naturally suited to the left, and therefore crosses the ball more frequently.

In the centre, Benitez signed Real Madrid’s Raul Albiol to become his main centre-back. The Spaniard has played a cool, calm role in a defence playing higher up the pitch than Napoli were accustomed to last season.

It’s also notable that Albiol has the highest pass completion rate of any Napoli player, in addition to his strength in the air.

Alongside Albiol, Benitez has selected three different players. Federico Fernandez, still developing at 24 but rather unconvincing when it comes to the basics of defending, has been tried once, but it’s essentially a straight choice between Paolo Cannavaro and Miguel Britos.

Cannavaro is the club captain, the longest-serving player and a Neapolitan – and that’s why so many expected him to be a regular. But Britos has actually been more impressive this season, and has started five matches compared to Cannavaro’s two. Particularly obvious has been the difference in aerial strength, where Britos has been much better.

In goal, meanwhile, Pepe Reina has been reunited with both Benitez and his old goalkeeping coach Xavi Valero, and has enjoyed a decent start to life in Serie A.

Although he made two poor errors when conceding goals against Chievo, he became the first man to save a Mario Balotelli penalty in the 2-1 victory over Milan.

It’s also worth considering Benitez’s textbook squad rotation – no outfielder has started all six Serie A games, with the rotation even spreading to centre-back.

So far their defence has proved effective, with Napoli conceding only five goals in seven games in all competitions. That, for a side that has undergone a complete change in defensive shape, is impressive.

Arsenal will need to be at their best if they’re to maintain their record of opening the scoring in every game so far this season.