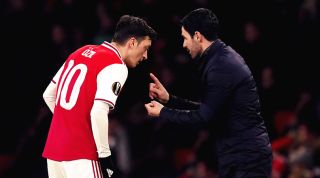 The Sagrada Familia cathedral in Barcelona is Spain’s most-visited tourist attraction. It’s beautiful - with columns resembling leafy trees lifting the stone ceiling from the floor, and technicolour stained-glass windows on either side - the light refracts into rainbows within the building itself. Yet it’s still not finished construction, nearly 140 years after work began on it.

“My client is not in a hurry,” architect Antoni Gaudi is said to have snarled when pressed for a deadline on his masterpiece. In a fast-paced, “on budget and on time” culture, Gaudi’s mantra is food for thought: that big projects take time. That results aren’t always instant. In the modern world at least, Tottenham Hotspur would certainly vouch that it’s worth waiting for architectural genius.

The Spanish know a thing or two about constructing a cathedral - and it’s exactly the same kind of project that Mikel Arteta took on in late December last year at Arsenal. This isn’t the redecorating job that Quique Setien has at Barcelona - just down the road from the Sagrada Familia - where Setien’s task is simply to brighten the place up with a fresh outlook; nor is Arteta hastenly putting together a brick wall, like Antonio Conte did at Chelsea, for example.

No - Mikel Arteta’s job is to build a cathedral. An ambitious structure in his own image, something beautiful and functional, that reflects his ideologies, his employers and will stand the test of time. And time is exactly what these kinds of projects require.

The foundations are already in place. Arteta has stuck rigidly to a specific kind of 4-2-3-1 that is both compact off the ball and fluid in possession. Personnel has varied but the shape has remained consistent - one full-back high, one tucking in, with one striker central and the other in the left half-space. As well-documented, he doesn’t have a lot to work with. It’s not always been easy.

There are obvious parallels to the 37-year-old’s previous project. Manchester City, like Arsenal, hired a Spanish architect to rebuild their club from the floorboards to the skylights. When Pep Guardiola arrived at Eastlands, Arteta in tow, they were greeted with an almost blank canvas. The task in the first season wasn’t to win the league, but to establish the blueprint for things to come.

There were doubters that first season. When Pep asked for high intensity from ageing full-backs who weren’t up to it. When beloved England No.1 Joe Hart was turfed out in favour of costly flop, Claudio Bravo. When City’s most enduring icon, Sergio Aguero, was dropped from the side altogether because he didn’t quite fit the role. Some saw it was pure arrogance from Pep; a pomposity to try and reshape our game in his image. Pep conceded his first season to Conte’s wall at Chelsea, but two titles and an England side leaning on his philosophies later, it’s safe to say that Guardiola's house is still standing strong.

With this in mind, it’s easy to see why Guardiola’s former assistant persists with Alexandre Lacazette through infuriating form - despite the temptation of playing red-hot Gabriel Martinelli. Lacazette is a better fit for Arteta’s system. The system is more important than individuals.

That’s why Eddie Nketiah came back from loan for the Gunners, and why a cumbersome, left-footed centre-back was signed, in Pablo Mari. These are not players to become cornerstones for the new era - they simply fit the style, so that Arteta doesn’t have to compromise the structure in any way. It's arguable that Mesut Ozil, too, is just a stop-gap - the playmaker for now, until at least a Grealish, Aouar or Havertz arrives.

Pierre-Emerick Aubameyang is a square peg out on the left for the Gunners, and would rather be playing in his natural role. But with the threat of the Arsenal captain leaving this summer, why should the manager shape his entire vision around a player who could jump ship in mere months?

The season has been over for Arsenal for a long time - long before the COVID-19 break, even. The work on the next campaign begun when Arteta took over; the job wasn’t so much to pick up as many points as possible over the preceding months, but to steady a squad that had been tinkered with to the brink. No more half-time substitutions. No more switch of formations. No dropping players, reinstating them and dropping them again. Just clarity. Above needing quality, Arsenal have needed direction for a long, long time.

After all, they hired Unai Emery to build them a brick wall, and it didn’t stand up to pressure. Now here we are, with a new project manager looking to implement a long-term vision. Decisions at times have been questionable. But sometimes the best projects take time to reveal themselves.