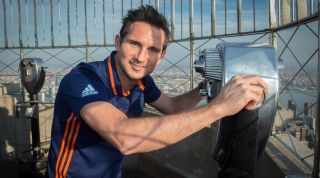 Even if he torches his credibility in the process, New York City FC’s stadium announcer is an eternal optimist. Last weekend, with the home side 5-0 down to cross-town rivals New York Red Bulls, and supporters’ patience with their injury-prone, $6m-a-year star midfielder already at breaking point, the voice over the PA system introduced the second-half substitute with no little misjudged enthusiasm: “Coming onto the field … Super Frank Lampard!”

Unsurprisingly, the tone pushed an already-tetchy home crowd over the line. Embittered boos rained down on Lampard as he jogged onto the field to partake in the final stages of a Hudson River derby that finished as a 7-0 shellacking for his new side. All in all, it probably wasn’t the starry-eyed vision of life in the Big Apple he’d had in mind when signing for the club.

But then it was his signing for the club – or more accurately, his not signing for them (more on that shortly) – that lies behind much of the current friction. Lampard didn’t exactly endear himself to NYCFC fans to begin with, and things have only gone downhill since, with his recent spate of injuries having done little to placate a fanbase who feel acutely short-changed by the whole saga.

“Frank Lampard doesn’t get it. He should just shut up and play” was the title of one suitably enraged NYC fans’ blog, penned in the wake of the derby debacle, in response to the midfielder’s protestations that it’s hardly been his choice to spend the last 10 weeks out injured. And while such vitriol seems harsh towards a player famed for his professionalism, it makes slightly more sense when seen as one more straw heaped on a camel whose spine had been creaking for some time.

Lampard’s rapport with NYCFC fans took an early sucker punch when, having seemingly committed to joining the club at the start of 2015, a series of last-minute and rather dubious communiques proclaimed that he’d be remaining at Manchester City on loan for another six months instead.

The two outfits are sister clubs (along with Melbourne City FC in Australia’s A-League) in the franchise owned by Sheikh Mansour and pals, and the loan deal took place under a cloud of administrative controversy – Manchester City admitted that Lampard had never officially signed for NYCFC in the first place, but simply agreed a “head of terms commitment”.

“I was asked from the top to stay in Manchester,” said Lampard, by way of explanation, when he finally did arrive in New York in July last year. But the implication – that the decision, taken in Abu Dhabi, rendered NYCFC a significantly lower priority than their Premier League counterparts – was hardly music to his new fans’ ears.

That saga went down bitterly with a sizeable contingent who – however new their club may have been – had already committed their loyalty to the institution (NYCFC had 20,000 season-ticket holders in their inaugural season). They had fully expected Lampard, who had been signed by the club as one of its 'designated players' and was presented to the fans as such, to be a part of the project from the off.

“We would like to publicly denounce Frank Lampard’s decision to extend his loan to Manchester City until the end of the Premier League season,” read a statement from a fans’ group, the Third Rail, at the time. “Many fans, including our members, decided to support the team, committed to season tickets, and bought merchandise under the impression that Frank Lampard would be playing for New York City Football Club, not Manchester City.”

Once he finally did join, a full year after originally 'signing', Lampard got off to a respectable start. He made 10 appearances at the back end of last season and grabbed three goals, but since then his 2016 season has been largely non-existent due to injury and trailing him the whole time has been the nagging suspicion that his commitment isn’t quite what it should be.

Coming as it did when he was sidelined with yet another niggling injury, his enrolment on the BBC’s punditry team for this summer’s Euro 2016 coverage (the tournament takes place during the current MLS season, although Lampard’s contributions will apparently be pre-recorded) was read as further evidence of a lackadaisical approach from a player who, despite being recruited as the start-up club’s showpiece player upon its inception, has appeared in fewer than a quarter of their fixtures so far.

Perceptions aren’t helped by the fact that Lampard’s salary exceeds the entire wage bill of his club’s immediate rivals, the Red Bulls, who administered last week’s 7-0 rout. Nor that NYRB are a team put together along startlingly different lines: cheaply, patiently, and with minimal Hollywood glitz these days. Bradley Wright-Phillips, who is imminently set to become the Red Bulls' all-time leading scorer, is a relatively low-key figure who’s made a home in MLS and reinvented himself accordingly, while Alex Muyl, who scored the fifth against NYCFC, has been at the club’s academy since the age of 15.

It’s a far cry from the team from across town, who count Andrea Pirlo and David Villa among their squad of A-listers (the former running Lampard close in terms of both wage and worthlessness so far this season).

In this sense, Lampard is probably more symbolic of the problem than responsible for it. He seems to have come to represent the NYCFC fans’ worst fears about their club: that it’s not valued on its own terms by either its owners or its players.

From afar, it’s hard not to suspect this sense of self-doubt may pervade U.S. fandom more generally, not least in the wake of events like last weekend’s, when kick-off to the Hudson River derby was delayed by 35 minutes due to the English FA Cup final going into extra time – hardly a gesture to instil the occasion with a sense of weight and self-worth.

Mourinho, by those who know him: what his former colleagues really think

Exclusive: Christian Pulisic is just trying to be a normal kid – but this summer will be far from that

How the original Dier and Alli earned Premier League redemption

Fast-moving as its recent history has been, there’s little doubt that MLS still labours in many quarters under the “retirement home” perception, the idea that the U.S. club game remains dependant on crudely imported glamour rather than innate and self-sustaining quality. In which case, the sight of Lampard and Pirlo pitching up in their dotage to collect exorbitant salaries for less-than-exorbitant performances is only likely to reignite existing insecurities, however worthy the intentions may be.

Apply this situation to the fanbase of a newly founded club, eager to assert their own culture and identity amid the many claims of inauthenticity from elsewhere, and the anxieties are likely to be doubly distilled. Do it all while patronising said fans with the idea they should be dumbly smitten by the entrance of “Super Frank Lampard” midway through a comprehensive derby-day humiliation, and you have a recipe for disaster – or at least, a recipe for lusty jeers from the paying public.

The good news for that public is that Lampard is a footballer rather more acquainted with adversity from his own fans than most – having been subject to friendly fire from the terraces playing for both West Ham and England – and he has made a habit of emerging on the other side majestically unscathed, generally clutching a medal or three for good measure.

Turning 38 this month, though, and with the clock ticking on the current MLS season, it’s fair to say he’s running out of time to repeat the trick.