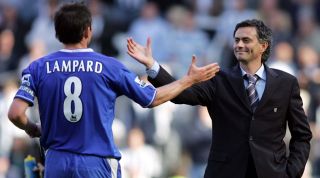 You might love him or hate him, but everybody's got an opinion when it comes to Jose Mourinho.

And whether you like it or not, he's on his way back to the Premier League with Manchester United. His glow has hardly dimmed despite a disastrous final spell at Chelsea last season – but that's because it's hard to have too short a memory when it comes to the Portuguese boss.

After all, this is a man who has bossed two clubs to the Champions League, Real Madrid to their last La Liga title in 2012 and Chelsea to three Premier League ones either side of that. So, about those opinions...

At Chelsea before Mourinho's arrival

"I've had a lot of very good managers, but Jose’s motivation techniques are the most incredible, whether it be kicking the flip chart or building the team up. He is always so confident.

"At half-time we might be drawing 0-0, but you come in and he will say, “We are going to win 4-0, we are playing so well, I can just sense it”. And generally that would happen. It was the first time I had ever heard that because managers never say that sort of thing as they think it makes their players relax and think it will be easy.

"I loved the feeling of being a consistent club in Jose's days. When he was here first when we won virtually week in and week out."

At Porto before Mourinho's arrival

"I had a lot of important coaches in my career but at that time Mourinho brought something different; he brought the ambition, because at that time in Portugal it was difficult for a club to think it could win the Champions League. Of course, Porto had won it in the past but it was a different time. After Bosman it was easier for players to move around, and clubs like Barcelona, Chelsea, Madrid, Manchester United had money to buy the best players.

"He brought something different; new ideas and the confidence to win something with a Portuguese club. Mourinho had studied the game for a long time before, watching other teams, and the good thing was that everything we did in training happened in the game, which gave players confidence in the coach. When you have been prepared for each situation that could happen, it means you are more prepared than the other team.

"He’s a winner. It’s difficult for him to accept results that don’t go his way. I can’t remember him ever losing it badly but sometimes when we lost a game – which if you can remember wasn’t all that often in our time – he would find it difficult to accept."

"Jose is my friend and he always will be, regardless of the comments he made about me. I don’t think it's right to fall out with anybody because of these little things. We had so many good memories together, and they are all very precious for me. What he said didn’t hurt me because I know he’s a good person – anyway, I may be old but I score more than all the youngsters!

"What happened to Jose at Chelsea this season was a surprise. It was a big loss for the club. Mourinho is very different to what you see in the media. He is fun, kind and friendly."

At Inter before Mourinho's arrival

"I like to have tattoos dedicated to my friends: I have a phrase from Mourinho.

"My emotion while saying goodbye to Mourinho after the 2010 Champions League Final was more anger than anything. I knew that without him we wouldn’t repeat such a winning season. Looking at Real Madrid’s season, I think he also has some regrets [Madrid lost out to Barcelona in the league and Champions League]. I am 110% sure that with him we would have won at least the UEFA Super Cup and the Scudetto.

"The single minute he brought me on in the Champions League final was the finishing line of a two-year process with Mister Mourinho, and of 10 with Inter. I do appreciate the greatness of a manager who is winning a final and doesn’t use his last sub just to let that player come on – that manager knows the importance of the details."

At Chelsea before Mourinho's arrival

"The similarity between him and Guardiola is an eye for detail in the way that they work. In footballing terms, Jose is a little bit more defensive – not defensive-minded, but in the way that he analyses the opposition. Mourinho is more chest-out ‘come and get it if you want’. Jose likes a bit of confrontation and a bit of discussion – and a heated discussion, at that."

At Chelsea before Mourinho's arrival, signed at Inter (2008)

"My relationship with Mourinho was spectacular. When he arrived at Chelsea, he wanted me to stay. I said I'd stay, but I also said: 'But Jose, Milan called me.' So I said: 'Look, Jose, this is very difficult, but if I have to choose between Chelsea and Milan then I'm going to choose Milan.'

"Jose replied: 'OK, I'll wait for you for one week. If in one week the Milan deal is not done, then you'll stay at Chelsea. Because if you don't stay then we have to go to the market to buy a replacement.'"

"Who would win in a fight between me and Mourinho? If it's physical then I would knock Mister out with one punch – no danger! In football terms, though, he's Mike Tyson. I'd have no chance. He was the best coach I played under: the most skilled, intelligent and clued-up.

"We beat Manchester United in the Champions League because before the game he said to keep the shape, keep it tight and prevent them from scoring – because if they score, we're screwed. But if they manage to break us down and score, that's when we attack and play against them like we played in Porto. If they don't score, a 0-0 draw suits us fine.

"United scored and we crapped ourselves, but before they could attack again we went full steam ahead. I don't think they'd been bullied like that."

Even those who haven't played under him...

Jimmy Floyd Hasselbaink: "I never worked with Jose. I left in 2004, and although I still had one year left I think he wanted to bring in his own people. I also think he had a perception of me that I was a little bit difficult or I would not be happy sitting on the bench. Months after, I spoke to him and he said he should have kept me, even just for another year, but that’s just how it goes."

Gerard Piqué: "With Mourinho around, there was an extra edge to El Clásico because he makes you play to the limit. He yanks your chain a bit. We wanted to put them under similar pressure."

Ronaldo: "I had a good professional relationship with him while he was a translator at Barcelona. At that time he was a nice man. Today I can't claim to know him very well and people change during their life, but I know that at least he used to be a nice person."

Luis Enrique: "When we were at Barcelona – me a player, him as translator – I never thought he would be a top coach. Not even he thought that. He obviously knew about football and spoke well, but he wasn’t the Special One yet. Robson went but Mourinho stayed. He had a good relationship with [Louis] van Gaal and Mourinho was very clear with us. I liked him."

Ronald Koeman: "When I was an assistant to Louis van Gaal at Barcelona, I came across Mourinho, who came in as Bobby Robson’s interpreter and became an assistant coach. When I was there he was mainly analysing Barcelona's opponents, but I remember he also helped Van Gaal to communicate with Portuguese-speaking players like Rivaldo and Figo.

"At that time, I didn’t expect Mourinho would go on to become one of the best coaches in the world. During our time together at Barça he was a very friendly guy, and you could see he had a strong character, which has developed even more since."