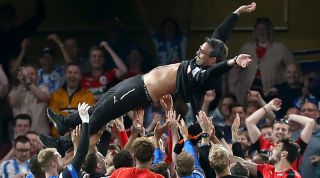 Thank God for Marcos Alonso’s face. But for Zanka’s clearance whacking the Spaniard in the mush and flying past Jonas Lossl to give Chelsea a draw against Huddersfield, the Premier League’s final day would be devoid of all the dramatic if-then reckoning that football needs.

Had Chelsea lost to slip three points and 16 goals behind fourth-placed Liverpool, all of the important top-flight business would have been sorted – champions, top four, Europa trio and bottom three (barring a nine-goal swing). In a week when it emerged that the fixtures are, as many suspected, carefully calibrated to ensure there’s a top-eight clash every ‘matchday’ but none on the first or last weekends, it’s not the unpredictable climax demanded by televised football.

But there is a way that the Premier League, and indeed other divisions, could all but ensure that the drama goes to the final episode. It’s been tried before, albeit in a half-arsed manner a generation ago. It’s the relegation play-offs.

At that very phrase, at least half the readership will be up in arms (or at least in eyebrows). Surely such blatant carnivalling is below the game’s dignity? Well, plenty said the same about the introduction of the “promotion” play-offs, now a vital part of football’s calendar, keeping cameras and crowds interested long after automatic places would have been sealed off.

Promotion is in quotes because when the play-offs were introduced in 1987, they were fought out between three would-be promoted teams and one heavily perspiring relegation candidate. Indeed, your reporter was present on the terrace as his team plunged into hitherto unplumbed depths of what was still a four-division Football League.

For those attempting to dodge the drop, losing in the play-offs didn’t mean try again next year – it meant instant relegation. And for the two years in which higher-tier teams joined the bun-fight, five of the six (Sunderland, Bolton, Chelsea, Sheffield United and Rotherham) slipped through the booby-prize trap-door, with only Charlton staying up, as they always seemed to under Lennie Lawrence (below). From 1989 the system reverted to automatic relegation, with play-offs contested between four promotion-seekers.

So there’s precedent for relegation play-offs, but they needn’t be mixed with the promotion shootouts – as they were in that quickly-amended '80s remix of the late 19th-century “test match” system, which pitted the Second Division champions against the top flight’s wooden-spooners.

It would require some logistics. With three losers (assuming a four-team play-off), we’d need four teams to drop, unless we abandon automatic relegation altogether – and there’s no need to get that silly. But there’s nothing wrong with a bit of churn. With the possible exception of Huddersfield’s slightly patronising fairytale, when did you last see a struggling team you didn’t support and think: “Well I’m glad they’ve stuck around to stink up the division again next year”? Is it particularly healthy that until last weekend, Oldham had been in the same tier since Tony Blair first became Prime Minister?

It would also offer much more hope to teams marooned at the bottom of the table: instead of focusing on a distant fourth-bottom team, they’d merely be reeling in the nearest rival. Every season, lost causes could be saved, long after they’d be considered terminal in the staid old world of automatic-only relegation.

Let’s consider this season. With the Premier League table as it is but under the play-off system, Darren Moore (below) hasn’t just leapfrogged Stoke but led West Brom out of the automatic relegation place; his in-form team now look set to take on Huddersfield – unless the Terriers drag in West Ham – for the right to face Southampton or Swansea (and the hotel jokes write themselves). In this alternative universe, nothing is yet decided down among the dead men.

Similar things would happen down the divisions. Bolton’s Macron miracle (two goals after the 87th minute to come from behind and save themselves) would count for nothing, but they’d be shaping up to face Burton, Barnsley and freefalling Reading: Birmingham’s last-day win over Fulham truly would have been a relegation-avoider.

In League One, Walsall and Wimbledon would have been involved down the wire. Just as the promotion play-offs give teams aspiration well into spring, so might an elongation of the drop zone keep them honest well after the clocks go forward. With fewer meaningless mid-table sides, fans would get better games, and those in the thick of the action would have less reason to fear their rivals’ opponents playing in flip-flops.

The 8 most undeserved promotions in football history

League Two might be different: it’s hard to imagine the Football League clubs voting for four trapdoor places. Pity, as Barnet, Morecambe, Forest Green and Port Vale all finished within two points of each other (with Yeovil only a further point north) and would represent a fascinating four-way of old and new, north and south. But even a straight fight between Morecambe and Barnet would be one to watch: two teams fighting to stay in the Football League, the sort of thing which happens only rarely but would assume monumental importance.

Change isn’t always good, but if it leads to more entertainment, value for money and #narrative, then we’re all winners – even those who had previously been forsaken as losers. We can’t always rely on Marcos Alonso’s face.