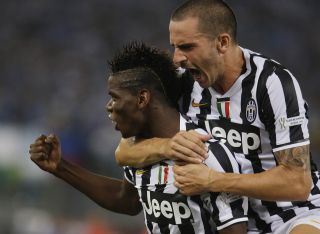 Manchester United may well be in crisis and City playing the European champions, but if you’re looking for something a bit different, an intriguing battle awaits in Turin as Italian champions Juventus host Galatasaray.

Juventus stumbled to a 1-1 draw in Denmark against FC Copenhagen on Matchday One, needing a second-half equaliser from Fabio Quagliarella to rescue Antonio Conte’s men a point.

Fortunately for Juve, their main rivals for qualification (assuming Real Madrid walk the group, which isn’t necessarily guaranteed) were absolutely battered 6-1 at home by Gareth Bale & Co., leaving Group B wide open heading into this second round of games.

Galatasaray’s start to the campaign has been a disaster. The Turkish champions won the league by 10 points last season but currently sit in 10th with only one win from five league games.

Their 6-1 slaughtering against Real Madrid led Gala’s president Ünal Aysal to sack legendary manager Fatih Terim, accusing him of, among other crimes, not responding to his text messages. The sensitive soul.

Roberto Mancini was appointed Galatasaray’s new manager this week, but supporters are angry at the way Terim, known as the Emperor, was dethroned by Aysal. Mancini therefore arrives under immediate pressure to get results – not that the former Manchester City manager isn’t used to that.

A nice mix of players from the past, present and the future will be on show at the Juventus Stadium.

At 35, Didier Drogba’s best days may be behind them (and some may say the same about 29-year-old Wesley Sneijder), but on their day both are still capable of the exquisite. Gianluigi Buffon, Andrea Pirlo, Carlos Tevez and Burak Yilmaz are very much the present, while in Paul Pogba and Bruma, Galatasaray’s €10million summer signing, we’ll be witnessing two players with the God-given talent to stand at the pinnacle of European football for the next 10 years.

Pogba is unquestionably the one that got away for Manchester United, a player so good Conte has almost had to rethink his entire team just to find a place for the young Frenchman with a peacock-like strut.

Meanwhile Bruma, a tricky teenage Portuguese winger dubbed 'the new Cristiano Ronaldo' by unimaginative types, managed to outdo the old Cristiano Ronaldo when the two sides met a fortnight ago, completing more successful take-ons despite being on the field for a full hour less than CR7.

Juventus have class in all areas of the pitch, but one of the more intriguing tactical battles will centre on the midfield magic trick conjured by Conte that involves centre-back Leonardo Bonucci turning into a replica Pirlo, like Doink the Clown in the WWF’s mid-90s heyday.

Known in American football parlance as platooning quarterbacks, or a Smelley Garcia if you’re anywhere near South Carolina, Conte has found a system which counters the theory that if you stop Pirlo, you stop Juve.

The answer is simple. Bonucci has been utilised as Juventus’ second quarterback, spraying penetrative passes to the front pairing of Tevez and Mirko Vucinic from a position virtually as high as a defensive midfielder, as demonstrated in Juve’s 4-1 win over Lazio in August.

This idea, of playmaking defenders, is one that Shakhtar Donetsk coach Mircea Lucescu recently theorised on, and looks like becoming an emerging theme of this season’s Champions League.

“All the great defenders are the first attackers,” noted Lucescu, who has coached in both Italy and Turkey. “They must have an attacking vision and not focus entirely on destroying. You cannot play with only midfielders or attackers. You need defenders with attacking skills: good control, the ability to play with both feet and the vision to create a numerical advantage and change the direction of the game.”

For Juve, the tactic has worked well. Bonucci has three assists in Serie A this season – more than Alberto Gilardino or Bojan Krkic managed in the entirety of last season, or casting the lens wider, as many as Tom Cleverley and Frank Lampard in the Premier League in 2012/13.

Juve are prospering as a result, and have even been able to rest Pirlo to keep him fresh for this game.

Galatasaray’s defence has been a shambles this season, and Emmanuel Eboue and his troops will need to be wary of long balls over the top, something they singularly failed to deal with against Real Madrid, as seen in the shambolic marking for Isco’s opening goal.

On the touchline, a meeting of two great Italian football minds also awaits. Conte has worked wonders in Turin, turning the club whose midfield he once graced with such tenacity and skill into a near-invincible force.

His 3-5-2 system relies heavily on high intensity and defending from the front – explaining the need for a player like Tevez – as well as strong focus on building through central midfield. The trio of Pogba, Pirlo and the effervescent Arturo Vidal, an often underrated but nonetheless outstanding midfielder, look to dictate the tempo, while Giorgio Chiellini, Andrea Barzagli and Bonucci provide a sturdy base from which to build from.

In attack Vucinic and Tevez have shown promising early signs of a blossoming partnership, though the latter faces a late fitness test ahead of this game after emerging battered and bruised from the 1-0 derby win at Torino last weekend.

For Mancini the game marks a welcome return to football against the club he idolised as a boy, and a chance to re-establish himself in the football coaching fraternity amid growing suspicion that the Italian gets found out at the highest level, following flat Champions League campaigns at Inter and Manchester City.

Mancini’s first priority will be solving the conundrum of how to successfully shoehorn Drogba, Yilmaz and Sneijder into the same team. Terim had difficulty assimilating the trio, eventually settling on a 4-3-1-2 system that often struggled.

The stone cold truth is Sneijder lacks the tactical discipline or defensive responsibility to fit into a 4-4-2, and a 4-3-3 system would mean shifting either Drogba or Yilmaz, the third top scorer in last season’s Champions League, into an uncomfortable wide position. Mancini also faces the challenge of trying to rein in Felipe Melo’s latent madman tendencies. Easier said than done.

“I rate him as one of the best coaches in Europe and it's only right that he's back in the game,” Conte said of Mancini before the game. A fascinating tactical battle awaits in Turin.