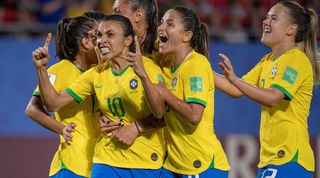 Most goals at a World Cup (Men’s and Women’s)

We had to wait five days for the reigning champions to show us their mettle at the 2019 World Cup – and boy, did they. 3-0 up at half-time thanks to Alex Morgan, Rose Lavelle and Lindsay Horan, the USA bagged 10 second-half goals – another record – to demolish Thailand and send a message to the challenging pack. Oh, and their seven different goalscorers set another record.

We get it, USA. You’re pretty good!

Most goals in the group stage (Men’s and Women’s)

Unsurprisingly, this record came swiftly after those 13 rattled in during their opener, the USA breaking the record for most goals in a World Cup group stage previously held jointly by Hungary in 1954 and Norway in 1995 (17 goals apiece).

Poor old Thailand. This one was almost inevitable given their start in the competition, but at least they did have one moment of unbridled joy when captain Kanjana Sung-Ngoen scored a consolation goal against Sweden – their first against a team ranked higher than them.

At the age of 41, she started against Jamaica this year to appear at her seventh World Cup and also become the oldest player to feature at a Women’s World Cup.

The forward’s treble got Brazil off to a flying start to this year’s tournament against Jamaica – though it was also the start of a horrible run for the Reggae Girlz, who conceded a hat-trick of hat-tricks (Cristiane, Cristiana Girelli and Sam Kerr) in their three group games; becoming the first team to do so.

Earliest penalty ever scored at a Women’s World Cup

Most own goals in Women’s World Cup group

While you're here, why not take advantage of our brilliant subscribers' offer? Get five issues of the world's greatest football magazine for £5 – the game's greatest stories and finest journalism direct to your door for less than a pint in London. Cheers!

INSIGHT We were promised sell-outs for the Women’s World Cup – so why the empty seats?

QUIZ Can you name the 60 most expensive English footballers EVER?

Buy the latest issue of FourFourTwo for exclusive interviews with the Lionesses!