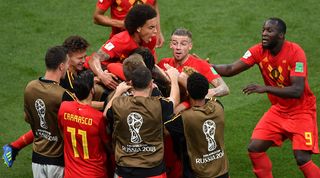 Two goals down in the second half and heading out of the World Cup, the knives were out for Belgium boss Roberto Martinez. It looked like once again a Red Devils side would underperform; a team that simply wasn’t the sum of its magnificent parts.

Yet Martinez made a double substitution after 65 minutes that sparked his side into life. He introduced Marouane Fellaini and Nacer Chadli and – while it was Jan Vertonghen’s wonderful lobbed header that brought the game back to 2-1 – his two substitutes proved crucial.

Fellaini headed in Eden Hazard’s pinpoint cross to make it 2-2. Then with the game deep into injury time and Japan actually pressing for the winner, Belgium burst onto the counterattack and Chadli won the game for his side at the death. Questions will linger for Martinez – is his team solid enough defensively? Why can’t he get the best out of Kevin De Bruyne? Yet today, his substitutions worked, and his side live to fight another day after the most pulsating half of the World Cup yet.

The bald statistics will say they only won one game – against 10-man Colombia – and sneaked into the knockout stages on the fair play rule. Yet Japan have brought so much entertainment to this World Cup (the 1-0 loss to Poland aside).

Akira Nishino’s team redeemed themselves for that defeat here. Japan were dynamic, organised and the pinpoint strikes by Genki Haraguchi and Takashi Inui to give them a 2-0 lead just after half-time were top-quality goals. Japan are still to win a World Cup knockout game, but – as the old cliche goes – they won plenty of hearts in Russia.

Hark, is that the ominous sound of a big, yellow machine going up through the gears? It's either that or the sound Neymar was making when his ankle was stood upon by Miguel Layun. In Brazil's 2-0 victory over Mexico (who competed in the first half, but were put to bed in the second), the five-time world champions showed the breadth of their attacking options.

The focus may always be on Neymar, but Coutinho was their main man in the group stage. Against Mexico, Willian, Gabriel Jesus and (once he’d come off the bench) Firmino all played a part in attack. Neymar, looking far sharper than he was in the group stage, will rightly grab the headlines for his goal, plus his run for Firmino’s late strike. But the attacking options around him are playing their part, as was particularly evident in the slick passing move for the opener.

On top of that, Brazil have now kept three clean sheets in a row as they eased to a trio of 2-0 wins. Suddenly, they look the best-balanced team in the World Cup.

We’ve already had the memorable moment of Egypt’s 45-year-old goalkeeper Essam El-Hadary pulling off a spectacular penalty save against Saudi Arabia, even if his side eventually lost 2-1. Now another veteran legend got a bittersweet moment in the sun. Rafael Marquez, 39 years young, was a surprise starter in the Mexico vs Brazil game.

Earning his 148th cap, the Mexican icon was removed at half-time, possibly a reflection of the sapping conditions. While watching his side fall at the last-16 hurdle was painful, Marquez can at least reflect that he helped hold Brazil for 45 minutes. It was 0-0 and in the balance when Marquez went off. If it’s to be his last game for his country, as seems highly likely, he leaves with head held high.

Mexico exited in the last 16 for the seventh World Cup in a row, unable to open up Brazil as they had Germany. Brazil, meanwhile, have now been in the quarter-finals for seven World Cups in succession.

Their higher quality of player always made the Selecao favourites, but perhaps Mexico – only too aware that this is their traditional stumbling block – were undone by the occasion, the weight of history and the opposition shirts as much as they were the players inside them. Mexico attacked frequently in the first half, but after going a goal down, they never threatened to get back into the team.

It was a talking point before the last 16 games even took place, but with favourites Brazil and Belgium both going through on day 19 (and with Spain shock losers on Sunday), the two halves of this World Cup draw look more uneven than ever. On Friday, there’s Uruguay vs France and Brazil vs Belgium (with the winners to face one another). Meanwhile, the lower half on Saturday features Russia vs Croatia and Colombia/England vs Sweden/Switzerland.

You could even say that the four strongest sides left in the tournament are all stuck in the top half of the draw. See, we knew Gareth Southgate had a masterplan in place when losing to Belgium (note: this point will instantly flip on its head when England lose to Colombia).

Southgate calls on Dele for make or break game

Any World Cup knockout game brings huge pressure, but how England play on Tuesday night against Colombia will define their tournament. Win and England will have – at worst – secured a quarter-final spot. Whatever talk there is now about the weakness of “this side of the draw”, that’s a decent outcome. Pre-tournament, getting to the last eight was widely viewed as an acceptable outcome for a young, untested team.

Should England exit, the glass-half-empty view will be: England beat two of the weakest teams in the tournament, then lost to the only two good sides they faced. Fans will still remember the attacking style of the team, but much of the early goodwill will be lost.

The result will also inform how the loss to Belgium is viewed. If England win, then it was wise for Southgate to rest his first-choice players; lose and the question of whether the manager was right to sacrifice momentum and consistency gets louder.

For the most important game of his managerial tenure, Southgate looks set to return to the starting line-up from the Tunisia game. Dele Alli is now fit after a thigh strain and is set to come back into the side for Ruben Loftus-Cheek, who has done well but perhaps not well enough to keep out a player of the Tottenham midfielder’s proven quality. Danny Rose as a left-footed wing-back in place of Ashley Young is the other possible change – but it seems unlikely. Southgate is ready to stick with his own first-choice side against Colombia.