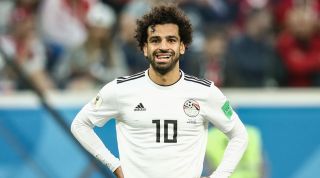 Hosts with the most

Thoughts that Russia only looked so impressive against Saudi Arabia due to the ineptitude of their opponents have been proved – partly – unfounded. Egypt may not be world-beaters, but they had frustrated Uruguay for 89 minutes and now boasted Mohamed Salah in their lineup. Yet, after a fruitless first half, Russia put together some fine attacking moves in the second.

On an error-strewn day, it was appropriate that Ahmed Fathy’s own goal opened the scoring. Yet after that, the goals for Denis Cheryshev (his third of the tournament) and Artem Dzyuba (his second) came from well-worked Russian moves.

There were hints that Russia’s defence could be exposed by a superior attacking team, just as there was early on against Saudi Arabia. But Russia are actually playing some good, varied, attacking football on the floor and in the air to the 6ft 4in Dzyuba. How's this for a fact: Russia have now scored as many goals in this World Cup as Spain did when they won the competition in 2010 (eight).

It was clear Mohamed Salah was never going to be 100% fit as he played his first football match since his cruel exit from the Champions League final with a shoulder injury. Yet Egypt – so toothless against Uruguay – had to try and risk their ace in this must-win match.

His movement was clearly limited compared to the dynamic player we see for Liverpool and, crucially, he lacked sharpness as he couldn’t quite make the most of a few half-chances. But it was probably worth the gamble for Egypt. Even half-fit, Salah offered little moments of class and provided an outlet for his team-mates that no other player in the squad too.

He eventually got his reward – albeit not the one he wanted – when he was pulled down inside the box. After correcting his initial decision of a free-kick outside the box (another successful VAR intervention), Salah lined up his spot-kick and lashed it home superbly. It’s almost certain that Russia are going through from Group A now, and Egypt very likely home, but at least Salah has a deserved World Cup goal to his name.

Argentina, Brazil and Peru had all failed to win their group openers, with Uruguay the only CONMEBOL side to earn three points in the first round of matches. Colombia were fancied to add their names to the winners' list against Japan, in part because history was with them: no Asian side had previously beaten South American opponents at the World Cup (three draws and 14 losses in 17 games).

Yet when Carlos Sanchez’s brain froze and his arm shot out to block Shinji Kagawa’s shot just minutes after kick-off, this clash turned on its head. Colombia were down to 10 men and facing a penalty, which Kagawa converted. Los Cafeteros were suddenly right up against it.

They fought back but looked short on ideas in the second half, Japan eventually running out deserved 2-1 winners thanks to Yuya Osako's header. This World Cup, that has seen so many big names stumble at the first hurdle, had another upset as Japan made history against a South American side.

The first round of group stage games in 2018 has brought more free-kick goals (four) then were scored in the entire of the 2014 World Cup (three). Yet while the curlers of Aleksandr Golovin, Cristiano Ronaldo and Aleksandar Kolarov were more eye-catching, Juan Fernando Quintero produced the most unique and sneaky strike.

Just before half-time, with Colombia a goal and a man down, Quintero gambled on the Japanese wall jumping. He slid a shot along the grass and caught out both the defence and keeper Eiji Kawashima, who scrambled across his goal but couldn’t stop the ball crossing the line.

It all came to nothing for his team, of course, but Quintero became the first Colombian to score in two different World Cups – just desserts for his quick thinking in a tournament that’s started off like a dream for free-kick lovers.

Poland were the seeded team in Group H, but you'd never have known it watching this dismal display. This was generally a game horribly low on quality and broken open by a goal befitting the standards – a scruffy deflection off Thiago Cionek from Idrissa Gueye's strike outside the box which was going wide.

Senegal led 1-0 at half-time without having had a shot on target. In the end, they won 2-1 with two efforts on target. Grzegorz Krychowiak halved the deficit with a fine header late on, but it was all in vain and not enough to divert attentions away from what was a very poor Polish performance.

Credit, though, to Senegal, who worked hard for one another all game and didn't give their rivals much of a look-in until the latter stages. They took advantage of an almighty cock-up between Krychowiak and Wojciech Szczesny to take home a valuable three points, which gives them a huge chance of progression.

James Rodriguez knows better than most how a World Cup can make a career. The 2014 golden boy lit up the tournament in Brazil with his Midas touch, earning him the affections of Florentino Perez and Real Madrid, who chucked over £60m at Monaco to sign him post-tournament.

Four years on, however, and a repeat performance against Japan was denied before he'd even kicked a ball. Colombia's star man had been inspired against the same opposition in 2014, scoring one of the best goals of the tournament, but fitness issues prevented him starting here.

By the time he did come on with half an hour remaining, the South Americans had battled back from a goal and man down to level – but they couldn't hang on. Japan regained the lead on 73 minutes, James had his best chance blocked soon after, and then ended his game with a booking and two more risky fouls. There wasn't a more frustrated figure in the Mordovia Arena – but they'll need him sharp and level-headed to get out of their hole now.

The knock on Neymar

It's not been a promising start to Russia 2018 for Brazil's main man, who took a bashing in the Seleção's 1-1 draw with Switzerland in their opening game and duly missed training the next day.

It emerged post-match that the luminously topped talisman had suffered the most fouls in a World Cup match since Alan Shearer at France '98 (vs Tunisia) – and the most for a Brazilian player since 1966. Ouch.

But now it seems such rough treatment may have taken its toll beyond Sunday's game. The 26-year-old was forced to limp out of Brazil training on Tuesday during a fairly innocuous rondo session. It's reportedly only a sore ankle, but that could still make him a doubt for Friday's game against Costa Rica. His team-mates had better get those tribute shirts at the ready just in case.