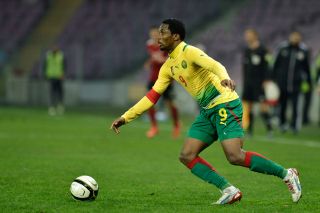 If only things were that simple, eh? The following day, FIFA stripped Ethiopia of their victory after it emerged they'd fielded suspended midfielder Minyahil Teshome Beyene in their 2-1 win over Botswana the previous week. The latter were handed a 3-0 default victory to leave Ethiopia's World Cup future in the balance.

But at least hey have fate in their own hands as they travel to the struggling Central African Republic, where only a win will guarantee progression to the next stage.

South Africa, two points behind with a three-goal advantage over the group leaders, have struggled in qualification this year - but it's still possible they'll be partying on the streets of Pretoria should they see off Botswana in Durban and Ethiopia fail to win.

Forget Botswana at your peril, though - The Zebras can still claim top spot should they bag an unlikely three points against South Africa and Ethiopia lose their crunch tie in Brazzaville. Don't bank on it, mind.

Another group goes down to the final day in Africa with both Tunisia and Cape Verde yet to cement top spot in Group B.

The pair face off on Saturday at the Stade Olympique de Radès in an all-or-nothing clash, with the hosts requiring just a draw and the visitors needing all three points. Tunisia, unlike their opponents, have history in the World Cup and have qualified four times, although they are yet to make it out of the group stages.

Cape Verde are still to reach the finals - and Saturday’s tie is a huge opportunity to edge closer to creating history.

It’s all on the line in this crunch World Cup qualifier, with both sides needing something from the game to progress. Ghana start as slight favourites needing only a point to seal a play-off spot, while Zambia require all three if they're to avoid elimination while simultaneously dumping their rivals out.

The Black Stars head into the match on the back of a 2-0 win over Lesotho in their last competitive outing - though Zambia take self-belief to the Baba Yara Stadium having beaten Ghana 1-0 in their previous meeting.

There was no love lost in the pre-match build-up. Zambia's flight was refused permission to land in Kumasi, before The Chipolopolo were barred from training at the Baba Yara after turning up late for their scheduled session - forcing an impromptu car park workout. They'll be rusty, but it won't devalue this fierce clash.

Three sides are still capable of sealing progression to the play-offs in Group E. Congo lead the way on 10 points, followed by Burkina Faso on nine and Gabon trailing with seven.

The outcome of the group essentially hinges on Congo’s trip to Niger, with the clear favourites requiring victory to guarantee their place in pole position. They'll almost certainly get what they need. Niger prop up the rest with just three points to their name - a default walkover victory over Gabon after the latter fielded an ineligible player.

Amusingly, the player in question, Charly Moussono Moussono, had played for Cameroon at the final competition of the FIFA Beach Soccer World Cup Rio de Janeiro 2006, and was therefore disqualified.

Burkina Faso, themselves on the wrong end of a walkover after fielding an ineligible star ("will they ever learn?!" we cry), have it all to do. They must beat Gabon at home in Ouagadougou and hope Congo don't win in Niamey.

Gabon's prospects are slim - only a four-goal win will do for the west Africans, who must also hope Niger pull off the majorly unlikely with victory over Congo.

With two points separating these two, Group F looks closer than you think. In their last meeting a 1-1 draw prevented Nigeria from taking control, but the Super Eagles have since found form.

Malawi may be outsiders but a first-ever win against Nigeria would see them leapfrog the West African giants into the play-offs. A controversial spat between the two managers, Stephen Keshi and Tom Saintfiet, led to the Belgian complaining to FIFA amid accusations of racism.

This foreground has dominated the game's build-up but the Nigeria camp are brimming with confidence. As Ahmed Musa put it, Nigeria will give Malawi “the beating they require”. Sportsmanship not a deciding factor here, then.

GROUP I
Cameroon vs Libya

Libya are often in the headlines for the wrong reasons, but a historic victory in Yaounde on Sunday would be enough to send them to within a play-off tie of a spot in Brazil.

With a game remaining, just a point separates Abdulhafeedh Arbeesh's underdogs from the likes of Samuel Eto'o & Co. While winning away at the group favourites seems unlikely, the Mediterranean Knights emerged with a 2-1 victory from the reverse meeting in Sfax.

Cameroon still hold top spot but that bubble could soon be burst by war-plagued nation still fighting for qualification to their first-ever World Cup.

Senegal head into the game in control of their own fate as group leaders, despite being pushed all the way by Uganda, who could yet steal their play-off place at the death.

Uganda have also proved strong opposition in this group, but come into the clash after a 3-0 friendly defeat to former Africa Cup of Nations winners Egypt. Senegal look like clear favourites with their wealth of talent across Europe’s top leagues, but in recent years African football hasn’t been quite as predictable as that.

Senegal’s experience should see them through, though, and a draw will do as they already hold top spot. Uganda need to pull off a shock in order to claim top spot.

After both finished third in their respective Asian qualifying groups, Jordan and Uzbekistan square off for a place in the intercontinental play-off. The winner of this tie will go on to face the fifth-placed team in South American qualifying for a spot at the 2014 World Cup.

Uzbekistan were unlucky not to secure automatic qualification for Brazil after they finished level on points with second-placed South Korea, but narrowly missed out on goal difference.

Their opponents also had a strong campaign, finishing just three points behind Australia in Group B. Despite conceding 16 goals, the most in their qualification group, Jordan managed to pip Oman into third thanks to a last-day 1-0 win to keep their World Cup dreams alive.