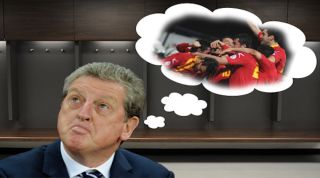 Montenegro coach Branko Brnovic has revealed that yesterday's World Cup qualifier against England was all an illusion he had created.

In the build-up to England's trip to Podgorica, Brnovic caused controversy with a series of inflammatory comments that Roy Hodgson dismissed as 'mind games'.

However, in the aftermath of an apparent 1-1 draw, Brnovic has outlined the true extent of his mentalist capabilities.

"Obviously England will be frustrated to have let their lead slip and only come away with a point, but it was a great second half performance from our boys," Brnovic told FourFourTwo.

Except that it wasn't a great performance from our boys, because there was no England lead - in fact there was no game at all. It was all me, Brnovic.

"We're not even in England's group, we're in Group C with the Republic of Ireland and Germany.

"But actually we're not even in Group C because Montenegro never became an independent state. It's still part of a united Yugoslavia."

Brnovic went on to reveal that apparent goal scorer Dejan Damjanovic was in fact Stevan Jovetic, who in turn is actually Mirko Vucinic. He was unable to clarify the purpose in this exchange.

UEFA have indicated that they will investigate Brnovic's claims but the result is likely to stand. Much of Latvia's successful Euro 2004 qualification campaign was found to be a vivid dream that Marius Pahars had after one of his famed cheese and wine evenings in Riga, but the Latvians were still admitted to the competition.

Brnovic concluded his interview in buoyant fashion, telling FourFourTwo that he fancied his side's chances of finishing top of Group H, insisting that they had already finished top of Group H and then ripping his face off to reveal he was in fact Roy Hodgson.