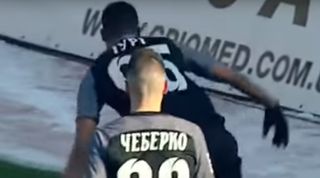 The 22-year-old joined Zorya from Avai last summer and is quickly making a name for himself in Ukraine.

Iury has scored six goals in 16 appearances and showed off his charm in front of goal by scoring a fantastic overhead kick in Luhansk's 3-0 win over Vorskla Poltava on Sunday.

In the 76th minute, he met Oleksandr Karavaev's cross and produced a fine acrobatic effort to send the ball crashing into the bottom corner. He then celebrated the goal by getting one over some racist fans in the crowd by mockingly mimicking a monkey.

In an interview with ESPN Brasil on Monday, Iury revealed that a group of Vorskla fans imitated monkey sounds just minutes before his goal and made racist gestures towards him when he took a corner.

He said: "I heard the insults a little before making the goal. Some fans imitated monkeys, and the time came to imitate the monkey so I celebrated it like that. They were making the noises like a monkey and I answered like a monkey."